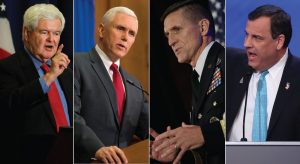 In a move late Thursday night, Donald Trump the presumptive Republican Presidential nominee said he was cancelling plans his campaign made to announce his running mate due to the terrorist attack in Nice, France.

This announcement came after a day of signals that seemed to indicate that the likely choice for his V.P. would be Mike Pence the Governor of Indiana.

Through most of the day, Trump aides were busy preparing for the formal announcement that Pence would be the V.P. candidate during a New York news conference Friday morning.

However, Trump said Thursday night that he still had not made his final decision between the Indiana Governor and two other possible candidates Chris Christie the Governor of New Jersey and Newt Gingrich the former Speaker of the House.

With the GOP National Convention only a few days away, it is not clear when Trump would finalize and or announce his VP selection.

However, he won a big victory as Republicans that set the rules for the convention next week squashed any attempts of robbing the nomination from him.

Trump cited the Nice attack as the reason he was postponing this announcement of a running mate, although the attack would not stop put a stop to his campaign.

Thursday night he was attending fundraising events across California.

Pence was seen on Thursday in New York, which was a strong indication he had been chosen, while former House Speaker Gingrich did not have plans to be in New York City.

Intense speculations was sparked by Trump when he held off the entire day on notifying Pence or another potential selections of his final decision, said Republicans who did not release their names.

Officials in Trump’s campaign cautioned that the VP selection process remained fluid but did not dispute Pence would likely be the choice, but noted that Mr. Trump could possibly make a surprise selection.

The time is critical for Pence. Indiana law states he has until Friday at noon to remove his name form the ballot in November for his bid to be reelected Governor. That step is required if he was chosen to be the nominee for Vice President on the GOP ticket.

Trump continues to be torn between his instincts to pick Christie or Gingrich who are fiery combatants or heed the advice of his advisers and select the low-profile soft-spoken Pence.