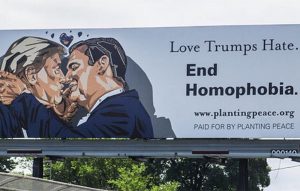 Donald Trump the presumptive Republican Presidential nominee who will be attending this week’s Republican National Convention has created controversy since he entered the presidential race over a year ago.

That controversy is continuing thanks to a group that is co-founded by Floridians that is behind a controversial billboard put up this past week in Cleveland that depicts Trump about to kiss U.S. Senator Ted Cruz from Texas.

Aaron Jackson from Destin is the co-founder of the group called Planting Peace. The organization paid for the billboard that is located in Cleveland leading up to the GOP National Convention that is being held there as well June 18-21.

Jackson said that his nonprofit global organization has called for action that is to bring fundamental, full rights to the LGBT community, as well as a narrative empowering the LGBT people to love and live freely.

Jackson said in a prepared statement to a newspaper in Florida what Donald Trump, Ted Cruz and the platform of the Republican Party either do not realize, or they realize and do not seem to care about at all, is their actions and words toward the LGBT community, especially the LGBT children, have both meaning and great impact.

LGBT children can hear the GOP messages, that tell them they are only second-class citizens and they are then left feeling broken or even less than that, said Jackson.

Another native of Destin, David Hamet is the group’s director of operations. Hamet said that the organization has called for the platform of the Republican Party to have an immediate change with regard to how its looks and treats the LGBT community, family and rights.

Hamet added that never again would a hateful, negative message be spoken under religious freedom. The message the group carries is that the LGBT family is consistent, as members are beautiful, valued and loved, added Hamet.

In other news, Tim Tebow the former quarterback with the Florida Gators and in the NFL was allegedly ready to attend the GOP convention this week, but now has backed out after Trump revealed that his running mate would be Indiana Governor Mike Pence. The decision was delayed because of the tragedy that took place last week in Nice.

The next four days will be important ones for Trump’s campaign as he tries to bring as much support as he can from the convention onto the campaign trail.

However, there remains great conflict amongst the members of the party and that divide could make his campaign for the White House even harder.