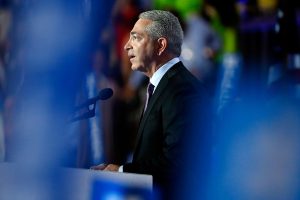 A former speechwriter and spokesman for former President Ronald Reagan appeared on stage Thursday at the Democratic National Convention. He proceeded to rip apart Donald Trump and to denounce any and all comparisons between the billionaire from Manhattan and Reagan the conservative icon.

It is an honor being here as well as a shock, said Doug Elmets. He added it was not because of the event’s momentous nature or size, it is a shock due to being a Republican.

He added that he voted in the last 40 years for nothing but Republicans, which is since he started to vote at age 18.

He said he did not just vote Republican but he worked in the White House under President Reagan and led an effort to put a statue of Reagan in the Capitol of California.

He told the crowd he came to the convention to say he knew Reagan, worked for Reagan and Donald Trump is no President Ronald Reagan.

He contrasted the famous demand made by Reagan to Mikhail Gorbachev the Russian leader to tear the Berlin Wall down with the plan by Trump to build his wall along the entire border of the U.S. and Mexico.

Reagan saw much nuance, said Elmets, while Trump only sees everything as us versus them, where somebody that has brown skin or a name that sounds foreign is the likely person to blame for the country’s problems.

Reagan on the other hand, said Elmets, knew that a leader of a nation needed diplomacy to steer toward a safe prosperous location. He called Trump a dangerous unbalanced, petulant reality star who alienates allies while coddling tyrants.

Elmets added that he shakes to think where the country would be led under Trump.

While Hillary Clinton has a number of policy positions I differ with, her qualification cannot be disputed. He added later that this year’s platform for the Republican Party was the most alarming he has seen to date.

He said it was full of anti-gay, anti-immigrant, anti-women positions and because of that, he would be voting to send a Democrat to the White House.