Families of Gold Star Recipients Lash Out at Trump 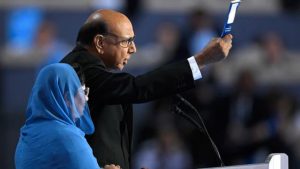 Families of 11 members of the U.S. armed services, who died while fighting, demanded that Donald Trump give an apology Monday accusing him of cheapening the sacrifice that those who were lost had made.

The families said that Trump’s suggestion that the Muslim mother of the soldier from the U.S. who died while in Iraq was not allowed to speak during the Democratic National Conventions was the same as attacking them.

A letter the Gold Star families signed, the term Gold Star is for those who lost a loved one during his or her military service, also called the comments by Trump personally offensive and repugnant.

The letter said that when you question the pain of a mother, by implying her religion and not her grief had kept her from speaking to an arena full of people then you have attacked all of us.

Karen Meredith of VoteVets.org organized the letter by Gold Star families. VoteVets.org is an advocacy group calling itself non-partisan but has been called during the past an ally of Congressional Democrats.

VoteVets.org has been fueled largely by the different social welfare groups that are aligned with Democrats says the Center for Responsive Politics.

Over this past weekend, Trump questioned why Mrs. Khan stood quietly by her husband as he talked about Humayun their son at the DNC.

Khan in his speech criticized the policies and the statements of Trump about Muslims. Khan said that the billionaire real estate magnate had sacrificed nothing as well as no one and put into question whether the nominee of the GOP had ever read the U.S. Constitution.

In 2004, Khans’ son, who was a captain in the U.S. Army, was killed by a bomb while guarding his air base front gates while in Iraq. He saved the lives of many fellow soldiers as well as civilians and was awarded posthumously a Bronze Star as well as Purple Heart.

Trump, who previously has called for barring Muslims from entering the U.S., responded to the Khan’s speech by saying Mrs. Khan was not allowed to say anything.

The comments by Trump go beyond all politics, according to the families’ letter. The letter said it was about a sense of decency.

The signatories of the letter included 10 families who lost loved ones in Iraq and one whose father had died in Vietnam.