Republicans: Senate Will be Lost if Trump Does Not Change 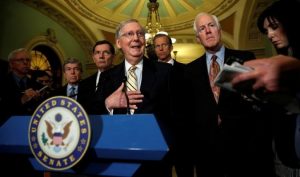 Leaders of the Republican Party are becoming more alarmed while watching the campaign of Donald Trump. The GOP leaders fear a landslide at the top of their ticket could eliminate their congressional majority.

For many months, top leaders in the GOP counseled their candidates to run individual races by separating themselves from the presidential contest while focusing on accomplishments made by Republicans on Capitol Hill.

However, in interviews with Washington’s top Republicans a number have said there is little they can do if the presidential race is lost by Trump in the battleground states by 10% or more.

If the losses are by 10% or more, the congressional majority is in big danger, said on Republican who requested anonymity when asked about the landscape of the Senate.

The GOP believes that there remains plenty of time to fix the problems particularly given the negative ratings Hillary Clinton has received in some polls.

They are also confident that their GOP incumbents in the Senate, many who are well funded, could help outperform Trump in key states.

However, Mitch McConnell the Majority Leader of the Senate said during an interview two weeks ago that it was still unknown whether or not Trump will be a help or hindrance to Republicans down the GOP ticket.

McConnell said the races in the Senate were well funded, big and individual not necessarily with any ties to Trump.

When he was asked if the GOP would maintain control of the U.S. Senate he replied confidently yes it would.

However, Republicans in the Senate need help from Trump, most importantly by ensuring he stays competitive until November’s Election Day.

In a meeting this past week that was behind closed doors, John McCain the U.S. Senator from Arizona urged Mike Pence the running mate of Trump to keep the Republican’s top ticket trained toward Clinton and not to engage in arguments with other GOP members or in distractions such as Trump’s feud with the parents of a Muslim American killed in Iraq.

For the Democrats to take back control of the Senate, the party will need four seats if Clinton is victorious in the presidential election and five seats if the election is won by Trump.

Opportunities in big numbers are available for the Democrats to pick up the seats needed if Clinton can win such as in Illinois, Pennsylvania, Ohio, New Hampshire and Wisconsin.