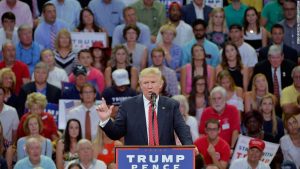 Donald Trump during an afternoon rally on Tuesday suggested that the “Second Amendment people” could do something about the judges Hillary Clinton will choose if she wins the election in November.

The comment was taken by some to mean Trump was implying violence could be taken against the nominee from the Democrats.

On Wednesday, Peter King a U.S. member of the House of Representatives said Trump should take back his comment made on Tuesday afternoon.

However, King also said during an interview on the Morning Joe show that the comment was overplayed by the media and dismissed any notion it was disqualifying for his bid for the White House.

The congressman from New York instead compared the remarks by Trump to the recently ended Democratic National Convention that he claimed more disqualifying because it spotlighted people who were anti-police and mothers of black Americans that were killed by police officers.

The comments by Trump came as he was discussing the position of Clinton on gun control with Trump repeating his claim he uses quite frequently that Clinton would in essence abolish the U.S. Constitution’s Second Amendment.

Robby Mook the campaign manager for Clinton said that no candidate running for President should be suggesting violence.

Mook continued by saying it is simple, what Trump said was dangerous. Adding that a person attempting to become President, should not suggest the use of violence.

Democratic Senator Elizabeth Warren a supporter of Clinton tweeted that Trump was a pathetic coward who made death threats.

Trump supporters were vehement in their defense for the Republican presidential nominee, saying that he was obviously speaking of the American voters that were passionate about the rights they are protected with by the Second Amendment and advocating the use of that power at November’s ballot box.

One Trump campaign worker also said that the Clinton campaign has become desperate and obviously is throwing a number of outrageous charges at Trump. He added he was surprised that such a large number of reporters had fallen for what he called was a ridiculous charge.

Campaign leaders have attempted on numerous occasions to get Trump to stick the teleprompter during his speeches and not use off the cuff remarks that tend to be controversial and put the nominee in hot water.