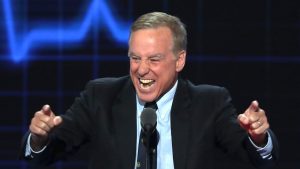 The case of the sniffles that Donald Trump had during the debate with Hillary Clinton on Monday prompted quite a bizarre charge from Howard Dean the one time presidential candidate from the Democratic Party.

While much of the hype prior to the debate focused on if Hillary Clinton the Democratic nominee, who Dean supports, might have a coughing fit, as it turned out Trump had the respiratory issues not Clinton.

The politician, who prior to entering politics was a developer, repeatedly had the sniffles, as he spoke to the audience at Hofstra University in New York that was seen by over 100 million people on television.

Dean tweeted asking the question if viewers noticed Trump sniffling repeatedly, then asked if he was a coke user.

That remarked gained over 7,000 retweets very quickly and over 7,770 likes. However, it prompted a huge wave of criticism immediately that was directed at the former governor of Vermont.

One Twitter user by the name of Mikey Adams tweeted, “Said the acid freak from Vermont.”

While another user tweeted, “It is a stupid comment coming from someone who ought to be taking the high ground,”

It has been claimed by Trump that he has never touched any alcohol or smoked a cigarette. Therefore, the suggestion by Dean that the 70-year old candidate turned to using hard drugs on his most important night of his political career was one that was hard to consider, let alone believe.

On Tuesday morning following the Monday night debate, Trump said there had not been any sniffles and that he did not have a cold. He said he did not suffer from a case of the sniffles and claimed it might have been his microphone.

Clinton, who earlier in September came close to collapsing during a memorial service for 9/11 amidst a battle with pneumonia and has had a number of bouts with coughing while campaigning, appeared very healthy during the debate of 90 minutes.

Most opinions voiced by journalists, politicians and political pundits have said that Clinton was the winner of the first debate and could use that momentum to once again increase her lead in the polls.