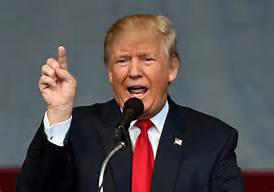 An open letter by the former Republicans slams the GOP nominee as unqualified for the presidency.

With fewer than five weeks left before Election Day, more Republicans that remain high profile are taking a stand publicly against the divisive nominee of their party.

Thirty former Republican congressmen on Thursday released a letter denouncing Donald Trump. The letter argues that Trump makes a mockery of their conservative principles and lacks all qualities necessary to be the leader of the U.S.

Each day brings another revelation that underscores an unaccepted danger in electing Trump to the highest office of the country, read the letter.

The letter prominently features both present and past lawmakers from a number of battleground states as well as key allies of powerful members of the GOP currently on Capitol Hill.

In the letter, they were critical of Trump for the numerous offenses against the handicapped, women, foreign allies and parents of a soldier who was Muslim that had been killed in action, for the suggestion that Muslims should be banned from the U.S.

Due to the enormous power the office holds, every presidential candidate must be rigorously judged in assessing if he or she has the intelligence, competence, knowledge, empathy, judgment, understanding and temperament that are necessary to maintain America on a steady and safe course, wrote the lawmakers.

Several of the signatories against Trump are allies with high profile leaders of the Republicans who currently, yet unenthusiastically endorse Trump.

Former congressman Tom Petri of Wisconsin was a close ally of Paul Ryan the House Speaker who spends time on air dismissing or condemning the latest Trump offenses while continuing to offer support.

The letter does not mention the opponents of Trump, but the GOP group of lawmakers is planning to vote for either Gary Johnson or Hillary Clinton, while others might write in one other candidate.

The group of anti-Trump lawmakers is the most recent of a number of open letters that Republicans have published denouncing the nominee of their party, including one that was signed by 50 figures in national security.

Other prominent figures against Trump included Mitt Romney the presidential nominee for the GOP in 2012 and both former Bush presidents, with father George H.W. supporting Clinton and his son George W. not making any comments about the race.