President Obama Focusing on Races for Senate While Campaigning 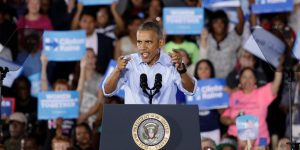 On Sunday, President Barack Obama campaigned in Nevada a battleground state for fellow Democrat Hillary Clinton who wants to be his successor. However, Obama spent the majority of his time discussing the Senate race in the state.

Democrats want to gain control again of the U.S. Senate on election day November 8. They are sending out Obama, his wife first lady Michelle Obama and Vice President Joe Biden to different states where races are close and could tip the senate balance in their favor.

In Nevada, President Obama reserved the majority of his speech for mocking Joe Heck the three-term Republican U.S. House Representative, who supported Donald Trump the GOP presidential candidate until a release of a video showing him bragging about kissing and groping women.

Obama said now Heck does not want to be associated with the words of praise he gave Trump prior to knowing about the video.

It was the second straight campaign rally that Obama spent the same amount of time or more discussing the Senate as he did Clinton’s quest for the White House.

Only a few days ago, the President severely criticized Marco Rubio the Republican Senator from Florida who is in a tough race with Patrick Murphy the Democratic challenger, for not rejecting Trump.

In both 2008 and 2012, Obama was victorious in Nevada. Current polls show that Clinton leads Trump by 4.2% in the battleground state.

The Senate seat for Nevada is the only race for the Senate this year that Republicans have a chance of flipping to them. Senator Harry Reid, who has decided to retire, has held the seat for a long time.

Obama was given an introduction at the event in Nevada by Catherine Cortez Masto, a Democratic running for the Senate seat. She is a two-term attorney general in Nevada who would become the first Hispanic woman elected to the Senate if she is to win.

Obama said during his speech that the country could not elect Hillary then saddle her with a U.S. Congress that does nothing because it is dominated by Republicans.

Cortez Masto is currently holding a slim lead of 2% over Heck. Reid complained that there was outside money from political foes David and Charles Koch that was being used in this race for the senate.

Roche Holding AG Given Consensus Rating of “Buy” by Brokerages