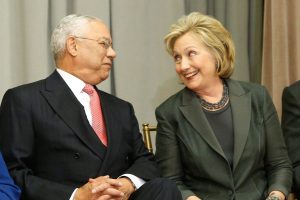 Former Secretary of State Colin Powell, who is a Republican, said on Tuesday that he would vote for Hillary Clinton the Democratic nominee in a huge snub of Donald Trump, his party’s presidential nominee.

Powell served in the Ronald Reagan and George H.W. Bush administrations. He also backed current president Barack Obama for both the 2008 and the 2012 presidential elections.

Peggy Cifrino the chief of staff for Powell confirmed his announcement.

Aides told Clinton of the support from Powell after a rally she held on Tuesday in Florida. One aide told reporters that Clinton was grateful for Powell’s support.

Later, Clinton’s presidential campaign tweeted that it was proud to have General Powell’s endorsement.

Powell, who is a former chairman of the Joint Chiefs of Staff, was critical of both candidates from the two major parties.

Emails that were hacked and released during September showed that Powell had condemned Trump giving him the label of an international pariah and a national disgrace.

One email that was sent on August 3 by Powell said that Trump was nuts. Everybody wants him (Powell) to speak out but the right time and the right place will be chosen for its maximum effect as he did in both 2008 as well as 2012.

Meanwhile, Clinton and Powell have had a difficult relationship at times. He pushed back repeatedly against reports this summer that suggested he may have given the idea to Clinton to use a private account for email, telling the media during August that Clinton’s people wanted to pin that on him.

Despite the support of Powell for the presidential nominee of the Democrats for the last three presidential elections, he said he remained a Republican.

He called himself a Republican due to believing in a strong defense and a belief in entrepreneurial spirit that in the past was so typical of the GOP.

However, at the time he said he was having difficulty with the current Republican Party.

Clinton earned support of other Republicans who are considered high-profile including former Senator Larry Pressler, former senior adviser to the campaign of Jeb Bush Sally Bradshaw, Meg Whitman the CEO at Hewlett Packard and Frank Lavin the former political director for Reagan.