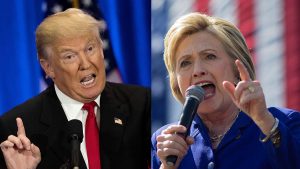 A large majority of U.S. voters have become disgusted with American politics and many hold doubts that either of the two nominees from the major parties can unite the nation, showed a final poll prior to next Tuesday’s election by the New York Times and CBS.

In a not so pleasant preview of voters’ discontent that could cloud the outset of the next term of the new president, Donald Trump and Hillary Clinton are looked at by most voters as unlikely to bring the U.S. back together following a bitter election campaign season.

With over eight out of 10 voters saying this campaign season left them upset instead of excited, the increasing toxicity of it threatens the eventual winner.

Clinton and Trump are looked at as being dishonest and viewed unfavorably by the majority of U.S. voters.

Clinton’s advantage of mid October has narrowed, but she still holds an edge in this latest survey due to a commanding lead amongst women and voters who are non-white.

Clinton is supported by close to 45% of the people likely to vote while Trump is supported by approximately 42%. Gary Johnson, the nominee of the Libertarian Party has dropped down to just 5%, while the candidate from the Green Party Jill Stein is at about 4%.

If Clinton wins, she will face immediate challenges to governing not just from steep partisanship ruling the environment in Washington, but from a large amount of supporters of Trump who are saying they will not accept the elections results.

Following weeks of accusations by Trump that the current election will be rigged on Tuesday, a little over six out of 10 of his supporters have said they would accept the election results as being legitimate if he were to lose.

Over 25% of those who support Trump said they would likely not accept the results of the election if Clinton were to be declared as the next president.

Close to 40% of them have also said they would have little to no confidence that votes by Americans will be properly counted at the Tuesday election.

The back and forth harsh words from both sides will continue for the next four days and then another election season will have come to an end.

However, this election season will likely be remembered more for its bitterness than anything else.