Florida Presidential Race Is Too Close to Call 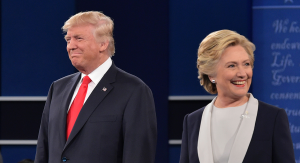 On Tuesday, both the Democrats and Republicans will be watching the polls closely in Florida.

For Donald Trump, the surprise presidential nominee for the Republicans, Florida’s 29 electoral votes are a big building block for most scenarios that end with him reaching the White House.

For Hillary Clinton, the former Secretary of State, a win in Florida holds a possible knockout blow that would all but ensure Trump will not win enough electoral votes to win the election.

Florida holds a number of issues that have been reshaping the electorate across the nation. Will Trump be able to get a big turn out from the disaffected white voters that helped power him to the nomination in the GOP in number that will win the general national election?

Will the African American voters stay energized following the electing of the country’s first black president? Will the growing Hispanic population in the country use the line policies on immigration of Trump against him in the election?

All that has caused both of the two major party campaigns to invest a great deal of time and money in Florida, both to persuade voters and of recent to get them turned out to vote.

Clinton, Trump and current President Barack Obama, one of the most effective Clinton surrogates, have come and gone repeatedly in the sunshine state during the last few weeks of the campaign.

That has created a race where both the candidates are in a virtual tie at the polls and the prospect of another recount looms big.

One political professor with the University of South Florida said that the race is a 1% election. The winner will win be no more than 1%.

If the idea of so many visits to Florida was to push the voters to vote, it likely has worked. Close to 4.9 million people in Florida, have already cast their ballots in the state, either in person or by mail as of last Thursday.

Both parties have returned about 1.95 million ballots and many more were cast over the weekend. The remaining has come from those Floridians who are registered with a third party or no party affiliation.

For the Democrats, some supporters of Clinton had been concerned the black voters were not appearing in the numbers they had in 2008 possibly eating into the advantage of the Democrats that they believe they hold in presidential elections in Florida.