Obama to Meet With European Leaders for Last Time 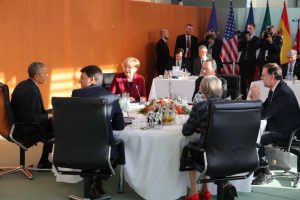 In Germany, U.S. President Barack Obama is meeting with key European leaders Friday to talk about a myriad of economic and security challenges that face the partners as the United States prepares to have President-elect Donald Trump sworn into office during January.

The meeting Obama is having with leaders from Germany, France, Britain, Spain and Italy is likely the last one of this setting prior to him leaving office. The session will expand on the long talks Obama held on Thursday with Angela Merkel the German Chancellor.

Some of the leaders were planning to make statements or to take questions from the press after the Friday meeting.

Since the arrival by Obama on Wednesday, which is his sixth and final trip to Germany as the president, he and the German chancellor have been focusing on issues of trans-Atlantic cooperation and globalization.

These talks are largely under the context of what the U.S. election of Trump means to the efforts to seek out peace in Syria and Ukraine, the NATO alliance strength, trade agreements, efforts in fighting climate change along with other important matters.

Merkel was diplomatic on Thursday following a meeting with Obama by saying during a news conference that she is approaching the incoming administration of Trump, with an open mind.

Across the globe, many have looked to Merkel, one of the world’s longest serving leaders of a major power, leader of the largest economy in Europe and one of the largest trade partners with the U.S. for leadership upon Obama leaving office.

Obama said that he could not ask for a more reliable or steadier partner on the world stage and thanked the German chancellor for the deep friendship she has for the U.S.

Joining Merkel and Obama on Friday are leaders of the countries facing a number of coming challenges in the European Union.

Matteo Renzi the Prime Minister of Italy already has a shaky economy that is being hit hard by thousands of Middle East and Northern African refugees.

The socialist government of France under President Francois Hollande is facing big challenges from the country’s far right in next year’s elections.