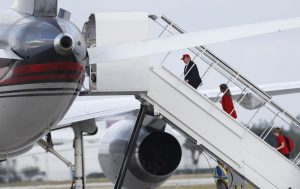 On Monday, President-elect Donald Trump returns to New York following his Thanksgiving break in Florida. He will be trying to fill important posts in his cabinet amidst the concerns over who he will choose for secretary of state as well as the distraction caused by a recount of votes in Wisconsin and possibly in other battleground states.

Trump will hold a number of meetings on Monday to narrow down his cabinet picks as the talks will likely intensify during the week about a possible Mitt Romney appointment to be his secretary of state after that news was leaked on Sunday.

Kellyanne Conway, Trump’s top adviser, said on Sunday she would support any pick Trump makes, but continues arguing that his supporters that backed his victory will feel let down if Romney is chosen since he declared that Trump was a phony and con man.

Trump and his advisers appear split on whether he should choose Romney a former Republican presidential nominee in 2012 or Rudy Giuliani the former Mayor of New York City, an early loyalist to Trump.

Reince Priebus the Trump White House Chief of Staff downplayed the rumors over infighting amongst Trump and his advisers over who will be secretary of state, saying Trump would make the decision that is best for the people in the U.S.

Former Speaker of the House Newt Gingrich on Sunday said that choosing Romney would be a disappointment.

Romney was one of the most high-profile Republicans who spoke out against the president-elect during his campaign.

People who are involved with the transition team said that the decision on secretary of state was not imminent. Others that have been mentioned for the position besides Giuliani and Romney include John Bolton and Senator Bob Corker.

At the same time, the recount slated to start in Wisconsin is a huge distraction. Election officials in the state will meet on Monday to determine a timeline for their recount.

This recount arrives after being requested by Jill Stein the presidential candidate from the Green Party, who says it was important to determine if hacking might have taken place to affect the voting results in the state.

Stein is planning to request that election officials in Michigan and Pennsylvania also hold recounts.

Via Twitter, Trump on Sunday went on the offensive attempting to assail the recount by claiming there was widespread voter fraud.

He said he won the popular vote if the millions of votes that were illegal were deducted.