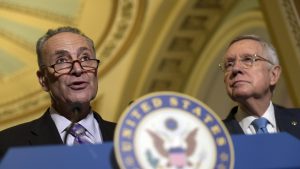 Incoming Minority Leader of the Senate Chuck Schumer announced on Sunday that the Democrats are committed to the undermining as well as slowing down of the confirmation process of Cabinet nominees of incoming President Donald Trump.

Schumer released his intent recently to the Senate Majority Leader Senator Mitch McConnell. Schumer said that Democrats are planning to target a minimum of 8 nominees to Trump’s Cabinet who failed in the disclosure of personal financial data that the Democrats want to review.

The Democrats are planning to target Trump’s nominee for Secretary of State Rex Tillerson; the pick for Attorney General Senator Jeff Sessions; the pick to run the Office of Budget and Management Mick Mulvaney a member of the House of Representatives; and the education secretary nominee Betsy DeVos.

Democrats are also planning to slow down or undermine the Andrew Puzder confirmation hearing. The restaurant executive has been selected to serve as the Secretary of Labor.

Former partner in Goldman Sachs Steven Mnuchin has been chosen by Trump to serve as the Secretary of the Treasury, while Scott Pruitt the Attorney General of Oklahoma has been picked by Trump to run the EPA and both will be targeted by the Democrats.

Schumer through a statement released on Sunday said that Trump was attempting to make his rigged cabinet out of nominees that break key promises he made during the campaign and who have earned millions from industries they would have to regulate.

Any attempt the Republicans plan to have a number of rushed and truncated hearings prior to Inauguration Day and prior to Congress and the public being given adequate information on every possible Cabinet member is something that will be vehemently resisted by Democrats.