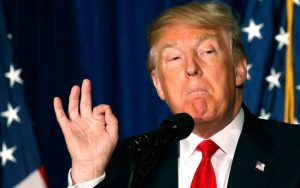 U.S. president-elect Donald Trump placed the blame on the acceptance by Europe of Middle East refugees, called by him “all these illegals,” for Britain’s decision to exit the European Union.

He predicted that the organization would fall apart unless there was a reversal of policies on immigration promoted by Angela Merkel the Chancellor of Germany.

Countries, people, all want an identity that is their own and the UK wanted its own, said Trump about the Brexit vote in June. However, he said he believed that if it was not forced to accept refugees, with the problems it entails, there likely would not have been a Brexit.

I believe that others are going to leave, said Trump about possible exits by other countries from the EU.

Merkel, a long time ally of the U.S., who faces an election in 2017, received criticism from Trump who also was critical of NATO the North Atlantic Treaty Organization, which has been the defense for the west against Russia in Europe.

At one time, Trump appeared to equate Germany’s Merkel with Vladmir Putin the leader of Russia, a put down due to the alliance between Germany and the U.S., but one representative of the frequent praise Trump has for Putin.

Trump added that he will start his presidency trusting both Merkel and Putin, but said he would see how long that lasted and added that it might not be that long.

Trump says Merkel made a very big mistake and that was accepting all the illegals from anywhere they came from and no one even knew where they had originated from.

In the U.S., entering refugees go through an investigation that can last as many as two years. However, Trump throughout his election campaign, and now nearing his presidency, has called them threats to the U.S.

The president-elect told reporters that he would sign presidential orders starting on Monday to restrict travel coming from Europe and impose extreme vetting for people coming from places that are known to be problematic due to Islamist terrorism.

However, Trump has never been clear as to which countries were going to fall under his umbrella of extreme vetting.

The statements by Trump, while maintaining his positions taken during his campaign, are in sharp contrast to decades of policy in the U.S.

Politicians from both major political parties have up to now favored more globalist approaches including trade deals internationally that Trump has scorned as well during his campaign.