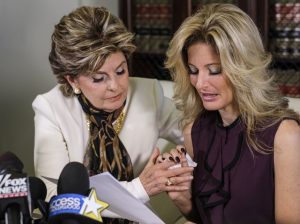 A woman, who has previously accused president-elect Donald Trump of making unwanted sexual advances, filed a defamation suit against him, only three days prior to Trump being inaugurated as the next U.S. president.

A former “The Apprentice” contestant, Summer Zervos said during a Los Angeles press conference that she filed her lawsuit over the alleged false statements made by Trump following her accusation.

The lawsuit, filed earlier this week claims that Trump knew that the statements he made about Zervos and other accusers of his would subject them to economic harm, reputational damage and threats of violence.

Zervos’ attorney said she was willing to dismiss her lawsuit without monetary damages if the president-elect agrees to retract the comments he made about her and to admit the accusations made against him had been true.

Zervos claimed during a press conference in October that Trump on a number of occasions had sexually assaulted her during a business meeting in 2007 at a hotel in Beverly Hills.

She said that Trump had made unwanted sexual advances on a number of occasions during their meeting, kissing her lips, pressing against her and groping one of her breasts and body without any consent by her.

The claims were vehemently denied by Trump. A spokesperson for Trump responded to the claims by saying it was just more of the same from attorney Gloria Allred and there was nothing true in the story.

During his campaign, Trump said that Zervos and other accusers were liars, claims the lawsuit and she and other women had been motivated to step forward due to ten minutes of fame they would receive.

In that, he used a bully pulpit as a means of making false statements and denigrate as well as verbally attack Zervos and other women who had reported to the public his assaults in October of 2016, the lawsuit read.

During the press conference, Allred said that Zervos had told her family and friends about the incidents back when they happened, but did not bring them to the attention of the public at that time as she decided that her behavior was either an aberration or test or that Trump had felt guilty over his behavior.

However, that changed following the release in October of a video dated in 2005 where Trump had bragged about groping and kissing women without them giving him consent.