Report: Trump Was Not Completely Briefed on Bannon NSC Seat 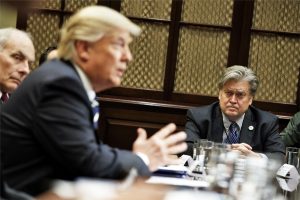 President Trump reportedly was not fully briefed about the executive order that he signed allowing Steve Bannon his chief strategist to have a seat at meetings of the top national security efforts of the country.

On Sunday, the New York Times ran a report that said Bannon has told his allies that he and Stephen Miller the policy director at the White House have their window to push their vision through of the economic policies of Trump.

Trump became frustrated about the executive order, as he reportedly demanded he was looped in on the orders earlier during the process of drafting them.

The reports said that Trump demanded that Reince Priebus this chief of staff come up with an approach to drafting executive orders.

Priebus reportedly told both Bannon and Trump that the White House needs a revamp of its policy and its communications following recent leaks related to the orders that are being made.

Priebus has created a checklist of 10 points for release of any new initiatives that must be signed off by the communications department at the White House.

Trump has restructured the National Security Council at the White House adding Bannon on the principals committee that includes the secretaries of defense and state.

In addition, Trump announced that his national intelligence director and Joint Chiefs of Staff chairman would attend when issues that pertain to their overall responsibilities and expertise are discussed.

Bannon was in the Navy prior to attending Harvard Business School. He then worked for Goldman Sachs, started a media focused investment firm and headed Breitbart News a ultraconservative media outlet that has received condemnation for, for featuring sexist, racists as well as anti-Semitic content.

Sean Spicer the press secretary at the White House said last month that Bannon was a former officer in the navy and has great understanding of the world as well as the geopolitical landscape of today.

However, Tim Kaine, a Senator from Virginia and the vice presidential nominee for the Democrats said that the NSC has questionable members citing Bannon as being amongst that questionable group.

Senator John McCain a Republican from Arizona called the appointment of Bannon a departure from any prior NSC.

He added that his understanding was that the role of the Joint Chiefs of Staff was diminished in the recent reorganization.