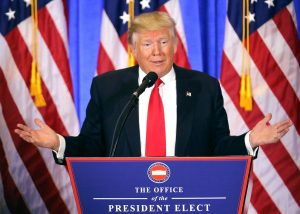 On Thursday, President Donald Trump aired out some grievances against the media, the intelligence community as well as his detractors in his new conference.

The president defended his handpicked advisers against the claims of improper contacts with officials from Russia. He claimed, which is contrary to the perceptions of most that his administration was running well.

He said that he inherited a mess during his new conference that lasted nearly 1 hour and 20 minutes and at times was combative and rambling.

However, minutes later Trump appeared to acknowledge widespread reports of upheaval and turbulence coming out of the White House, then to claim his White House, was operating seamlessly even though it has been setback by the controversial travel ban, staff feuding, many leaks and false statements.

Trump said he watches television, reads newspapers and sees stories claiming chaos. Yet he added it is completely opposite, the administration he added was running smoothly despite not being able to get Cabinet nominees approved.

The news conference capped one month of White House turmoil in what thus far is the most tumultuous beginning to any presidency in modern history.

The approval ratings for Trump are dropping in the majority of polls, and he has battled setbacks that included his firing of Michael Flynn as national security adviser, and the decision by Andrew Puzder the nominee for Labor Secretary to withdraw amidst increased opposition amongst lawmakers.

Thursday night the turmoil continued as the pick by Trump to replace the fired Flynn, Robert Harward, the retired Vice Admiral, turned the job down.

A senior official said family considerations were what changed the Vice Admiral’s mind and a friend said the hard charging former SEAL was not completely comfortable with the process.

One factor as well was that he could not be guaranteed he would be able to select the staff he wanted according to a source aware of the decision making process.

Trump said earlier during his news conference that one reason he let Flynn go was because of the good replacement he had, without mentioning a name.

Asked about reports that Flynn improperly talked about sanctions against Russia with that country’s ambassador before Trump had been sworn in, the president called Flynn a fine person and said nothing wrong was done by engaging the envoy from Russia.

However, Trump did say that Flynn erred when he misled government officials that included the Vice President about conversations he had with Russia.