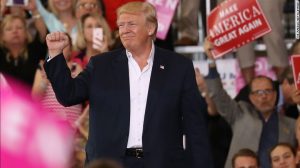 On Sunday, President Donald Trump, in what can be described in an unusually measured and subdued tweet, pushed back against the false claims he made up a terrorist attack in Sweden.

The president used his twitter account to clarify that he had not been referencing an actual attack but a segment on Fox News.

Through Twitter the president said that his statement of what is happening in Sweden had been in reference to a report that Fox News broadcast concerning Sweden and immigrants.

The tweet lacked Trump’s usual characterizations, denunciations and above all exclamation marks.

During a speech in Florida, Trump appeared as if he referenced a Friday interview that Tucker Carlson held with a filmmaker of documentaries who claimed the rising rape and gun violence in Sweden had correlated with it allowing in over 100,000 refugees.

That segment had been illustrated through the use of video of a fire and broken windows and said that just 600 of the migrants found jobs in the country.

A spokesperson for the White House said on Sunday that Trump had been talking about increased crime and incidents in general that had happened recently not one specific incident.

Trump had been discussing the travel ban he implemented and refugees at the rally in Florida on Saturday when he had said the U.S. had to keep its country safe. He referred to what was happening in Germany and what happened the night before in Sweden.

Media outlets quickly called his Sweden remark a gaffe, by writing that Trump appeared to have made up a story of a terror attack in Sweden.

That comment caused a huge reaction on social media with hundreds of different tweets and one newspaper publishing a number of events that took place Friday that appeared not to have any connection to any activity that was terror-like.

Former Foreign Minister of Sweden Carl Bildt in a tweet asked what the president of the U.S. had been smoking.

Sweden has had a reputation for years for welcoming migrants and refugees and had a new record of 163,000 applications for asylum during 2015. The country since then has cut back how many it accepts annually.