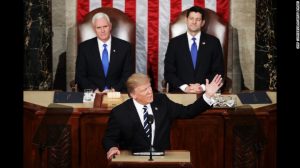 President Donald Trump delivered his first address to Congress on Tuesday. In his address, he defended his presidency and said he wanted to reach across the party lines and put trivial fights aside to help Americans.

He asked Congress to work on overhauling healthcare with him, changing tax code as well as rebuilding the military and the nation’s infrastructure.

However, he did raise a few new questions related to his policy priorities as well as how he is planning to achieve those, especially where it relates to immigration.

Just hours prior to his address, the president broke from his tough stance on immigration with remarks he made inside the White House that suggested that legal status be given to millions of undocumented immigrants that have not committed any type of serious crime.

Many of the core supporters for Trump denounced that type of approach calling it amnesty while he was campaigning.

However, during his Tuesday speech, Trump did not mention the legalizing of the undocumented immigrants and held onto his tough them for immigration has used during his campaign.

At an earlier meeting in the White House, Trump reportedly said the time was right to have an immigration bill if both sides were willing to compromise.

That idea is in sharp contrast to the crackdown in the U.S. on immigrants that Trump ordered during his first weeks as the president and his hard line positions that his core supporters have embraced that helped him win the election.

However, Trump made a slight reference to an overhaul of immigration during his Tuesday speech calling for a new system that was merit-based and would admit just those that could support themselves. Overall he kept a hard line when it came to immigration.

Trump said that as he spoke, the government was removing drug dealers, gang members and criminals that all threaten communities around the country and prey on citizens.

However, the speech by Trump was more optimistic and in contrast to dark themes he expressed during his inaugural address.

The themes he spoke of were Republican orthodoxy for the most part, delivered quite soberly and near verbatim from text that was prepared. Trump read off the Teleprompters and appeared to be serious and restrained.

He was interrupted by Republicans dozen of times by standing ovations although the Democrats for the most part remained stone-faced, all of which was not surprising to those in attendance or watching on television.