New Travel Ban by President Trump Could be Announced Monday 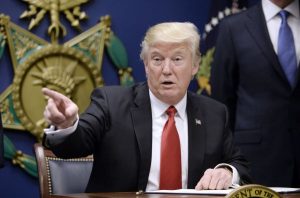 It is expected that President Donald Trump would sign his latest executive order as early as Monday that suspends admissions of refugees and bans the entry of people from six countries that are Muslim-majority.

The new order was revised from the original that Trump signed during late January and argues the move was needed to review the refugees vetting process and to protect the country’s national security.

It banned the entry of those people who were from Sudan, Somalia, Yemen, Libya, Syria, Iran and Iraq.

Officials have said that the new order would remove Iraq but that the others would remain under the ban.

A new temporary ban on the entrance of refugees would also be part of the new executive order, but Syrians would not be singled out any longer for a further ban that is indefinite.

This new order has been worked on for a number of weeks, and is expected to be signed by Trump as soon as Monday. Many orders signed previously have appeared on schedules released by the White House, but a signing does not appear on Trump’s schedule for Monday.

An appeals court barred the implementation of Trump’s original order, which the White House continues to fight while at the same time making a revised version. Challenges brought by a number of states could at some point end up in the U.S. Supreme Court.

The ban the White House placed on immigrants caused a great deal of chaos at airports across the globe as officials in immigration attempted to figure out if it affected those travelers that held permanent resident cards as well as pre-approved visas.

However, Homeland Security was able to clarify that those people already in possession of visas could enter and officials said the updated version would make that clearer.

Former Secretary of Homeland Security Michael Chertoff said he hopes that the president comes up with a new order that makes good sense and does not get people who caught up in the net that should not be.

Trump’s first order exempted religious minorities. It said they were admitted as refugees if they faced religious persecution.

However, critics pointed to exclusively of nations that were Muslim majority in the first order to say Trump was working to help the Christians while excluding the Muslims. This new version will likely drop the provision.

Trump proposed originally in his campaign to bar Muslims from entering the U.S., but later amended to bar people from entering from nations with terrorism links.