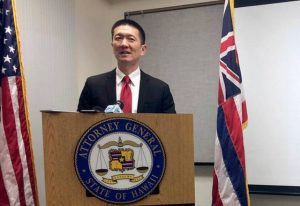 The U.S. state of Hawaii will ask a judge to block the revised Presidential executive order that bars issuance of new visas to people from six nations that are Muslim-majority, according to a filing of a document in court.

Lawyers from Hawaii hope to make the filing on Wednesday and it would mark the first formal challenge to the new order that the president signed on Monday.

Hawaii sued over the first travel ban signed by Trump, and its lawyers told a judge through a court filing they wanted to resume the litigation to request a temporary restraining order for the new executive order.

Civil liberties organizations and Democrats asserted shortly after the signed executive order by Trump that additional litigation would be certain since in their opinion, the measure was a Muslim ban.

However, the latest order was significantly different from the previous one and no immediate legal challenges were made.

An attorney in Washington, who successfully sued to put a hold on the first presidential directive, said on Monday he needed additional time to study Trump’s new one prior to deciding what would be done if anything.

The new order lowers the listed of countries affected to six from seven. It eliminated Iraq while keeping Syria, Yemen, Sudan, Libya, Somalia and Iran.

It also explicitly exempted all current visa holders and legal permanent residents, blocking just the issuance of any new visas for the citizens of the six countries for up to 90 days.

It also has a long list of people that are possibly eligible for an exception, including those admitted previously to the U.S. for a continuous period of study, work or other activity that was long-term; those with significant professional or business obligations; and those looking to visit or live with members of their family.

The newest order also suspends the refugee program for 120 days as did the first order. It declares the U.S. will not accept over 50,000 refugees annually, which is down for a cap of 100,000 set by the prior White House administration.

The second order signed on Monday will take effect on March 16, which in Hawaii is March 15. Lawyers for the Justice Department indicated that the White House intends to enforce this measure starting that day, as they consider a freeze ordered by the court on the first order as no longer being applicable.