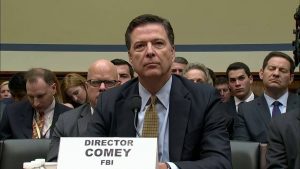 FBI Director James Comey and Head of National Security Agency Michael Rogers will testify Monday on the conclusion reached by the intelligence community that Russia interfered win the presidential election of 2016, and they will face questions related to possible collusion between the Kremlin and associates of current President Donald Trump.

The hearing will be before the House’s Intelligence Committee and comes amidst controversy that was ratcheted up by the president a few weeks ago when he released a tweet that provided no evidence that former President Barack Obama ordered the phones at Trump Tower to be tapped.

It is expected that Comey will publicly refute that Trump allegation according to the ranking member of the committee Rep. Adam Schiff a Democrat from California.

Comey will testify following a number of former and current senior officials that have said there was no evidence of any wiretaps on President Trump or the Trump Tower.

Comey has privately told some lawmakers last week there was no basis for the Trump claim.

Only hours prior to the start of the House’s hearing, Trump posted a number of tweets that claimed Democrats made up allegations of Russian contact as a way to try to discredit the Republican Party during last year’s presidential campaign.

Trump urged as well federal investigators to shift focus and probe the disclosures of material that is classified.

He added that the real story the FBI, Congress and others should be focusing on is the leaking of information labeled Classified.

On Sunday, the chairman of the committee Rep. Devin Nunes a Republican from California, who served on the transition team for Trump countered the assertions of the president.

The FBI has conducted a counterintelligence investigation of wide ranging proportions into the covert role of Russia in last year’s election.

The bureau, as part of that investigation, has explored the potential links between associates of Trump and Moscow, but Comey has not publicly acknowledged that at any time.

He has upset lawmakers on both sides of the aisle and leaders of the Judiciary Committee in the Senate have threatened to hold up confirmation of a deputy attorney general until he gives the committee a brief on this matter.

The probe by the FBI combines its investigation into the hacking operations by spy agencies from Russia with efforts of understanding how Moscow sought to be manipulative and to influence the outcome of the election.

FaraLand Trading Down 9.1% Over Last 7 Days