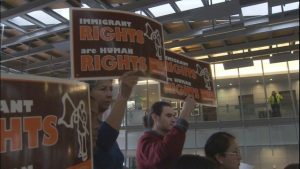 On Monday, the Department of Homeland Security released its initial report to the public that names counties that refused to honor requests by the federal government to detain those who are suspected of violating the U.S. immigration laws.

DHS’ Immigration and Custom Enforcement or ICE issued almost 3,100 requests of that kind from January 28 to February 3 and found that in 206 instances immigrants had been released from police custody rather than held and then turned over to immigration agents.

The report released on Monday by the DHS follows President Donald Trump’s executive order signed during January that called for in part a complete list of localities that would not honor the detaining of people.

Federal judges have ruled previously that localities are not obligated to honor detainer requests, since they are not warrants that have been signed by judges and are not binding legally.

Courts have ruled as well that detaining a person beyond his or her scheduled date of released can be a violation of that detainees Fourth Amendment rights if no legal justification exists for a continued detention.

The 206 ICE identified cases on the list include some requests for detention that date back to 2014 and do not represent every detainer request that was issued, says an international news agency.

The list also included in error one county that did not honor detainers – the sheriff’s office of Nassau Count in New York quickly pointed out that it was incorrectly named on the list.

Of the more than 200 instances that the DHS report documented 142 took place within Travis County, Texas. That county’s sheriff just recently enacted a new policy of refusing all detainers unless those requests received together with a warrant, or the suspects have been charged with aggravated sexual assault, human smuggling or murder.

Officials in Travis County on Monday told the media that the over representation of the county in the DHS report was due to the timing and that subsequent reports will have less instances.

The sheriff’s office said that the week the DHS picked happened to be the time in which the county implemented its new policy and said that of 38 people who had been released on bond that had felonies in their police records, 37 attended their scheduled hearings in court.

County officials said that record was just as good as that of U.S. citizens who have a court date. People are showing up to court appointments they reiterated.

Short Interest in The Charles Schwab Co. Increases By 25.5%