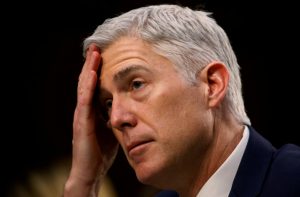 The Supreme Court nomination of Neil Gorsuch faces its most dramatic week to date as senators are preparing to make important votes that could cause a splintering of the chamber and a divisive change in the rules imposed by the Republicans that would ensure that by Friday they can confirm him to the high court.

With just three Democrats announcing they would support the 49-year old Gorsuch, its looks more likely he will not get the needed 60 votes to overcome the filibuster by the Democrats.

If that is to hold, as senators and aides for both parties expect, a promise was made by the Republicans to use their “nuclear option,” that would change rules in the Senate over the Democrats objections so members of the GOP could can advance the judge on a vote along party lines.

Informal talks amongst bipartisan senators have been held to prevent this crisis from taking place, but to date there has been not sign of a deal.

A number of senators have become concerned that if the GOP can weaken the filibuster for nominees of the Supreme Court, in the same fashion the Democrats did for all presidential appointments back in 2013, the senate would be slipping down a slope and filibuster for legislations might someday be completely diminished.

Their belief is that would make the chamber much more partisan that it already is and less likely to respond to the needs of the nation.

Democrats have argued that Gorsuch is not in the judicial mainstream and had been selected off a list from during the campaign compiled by the president to satisfy the Republican Party’s far-right.

The Democrats want Gorsuch blocked and to force the president to choose another nominee that could be supported by them.

If the judge cannot gain the 60 votes needed, the only answer is not to change the Senate’s rules, but to change who the nominee is, said Chuck Schumer the Minority Leader of the Senate, who is a Democrat from New York.

Democrats remain upset that the Republicans would not act on the Supreme Court nominee of former President Barack Obama, who picked Judge Merrick Garland over a year ago for the same vacancy.

Republicans say Gorsuch is highly qualified and has support from legal scholars. They believe that the Democrats are just politically motivated and would not confirm a nominee for the high court that is picked by the President and that justifies the use by them of the nuclear option.