Cabot (NYSE:CBT) last announced its quarterly earnings data on Monday, February 3rd. The specialty chemicals company reported $0.69 earnings per share (EPS) for the quarter, missing the consensus estimate of $0.73 by ($0.04). The company had revenue of $727.00 million during the quarter, compared to analyst estimates of $772.38 million. Cabot had a return on equity of 18.47% and a net margin of 3.98%. The company’s revenue was down 11.4% on a year-over-year basis. During the same quarter in the previous year, the business posted $0.87 EPS. On average, sell-side analysts expect that Cabot will post 3.68 EPS for the current fiscal year.

The company also recently announced a quarterly dividend, which will be paid on Friday, March 13th. Investors of record on Friday, February 28th will be given a $0.35 dividend. The ex-dividend date is Thursday, February 27th. This represents a $1.40 annualized dividend and a yield of 3.22%. Cabot’s dividend payout ratio (DPR) is currently 35.81%.

In related news, SVP Hobart Kalkstein sold 2,833 shares of the firm’s stock in a transaction on Thursday, December 12th. The stock was sold at an average price of $48.34, for a total value of $136,947.22. Following the completion of the transaction, the senior vice president now directly owns 40,954 shares of the company’s stock, valued at $1,979,716.36. The sale was disclosed in a document filed with the SEC, which can be accessed through the SEC website. 2.08% of the stock is owned by company insiders.

Cabot Corporation operates as a specialty chemicals and performance materials company. The company offers rubber grade carbon blacks used in tires as a rubber reinforcing agent and performance additive, as well as in industrial products, such as hoses, belts, extruded profiles, and molded goods; and compounds of carbon black and rubber.

Further Reading: What does cost of debt say about a company’s financial health? 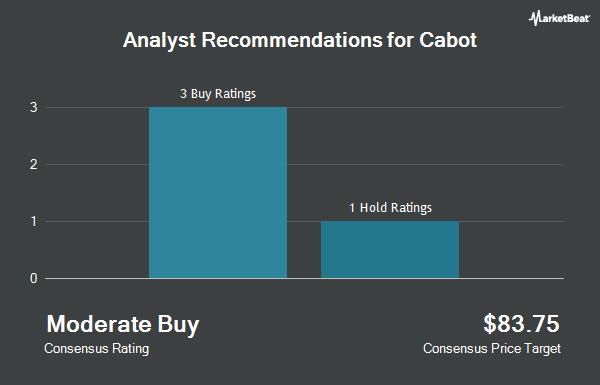 Receive News & Ratings for Cabot Daily - Enter your email address below to receive a concise daily summary of the latest news and analysts' ratings for Cabot and related companies with MarketBeat.com's FREE daily email newsletter.