State Board of Administration of Florida Retirement System Has $462,000 Stake in Supernus Pharmaceuticals Inc (NASDAQ:SUPN)

May 23rd, 2020 - Comments Off on State Board of Administration of Florida Retirement System Has $462,000 Stake in Supernus Pharmaceuticals Inc (NASDAQ:SUPN) - Filed Under - by Jeff Wilder
Filed Under: Finance - SEC Filing Articles
Tweet

State Board of Administration of Florida Retirement System trimmed its stake in shares of Supernus Pharmaceuticals Inc (NASDAQ:SUPN) by 63.3% during the first quarter, according to the company in its most recent disclosure with the Securities & Exchange Commission. The firm owned 25,706 shares of the specialty pharmaceutical company’s stock after selling 44,400 shares during the period. State Board of Administration of Florida Retirement System’s holdings in Supernus Pharmaceuticals were worth $462,000 as of its most recent SEC filing.

In other news, CFO Gregory S. Patrick sold 15,000 shares of the business’s stock in a transaction dated Wednesday, May 20th. The shares were sold at an average price of $25.03, for a total transaction of $375,450.00. Following the transaction, the chief financial officer now directly owns 61,057 shares in the company, valued at approximately $1,528,256.71. The transaction was disclosed in a document filed with the Securities & Exchange Commission, which can be accessed through the SEC website. 6.57% of the stock is owned by insiders.

Want to see what other hedge funds are holding SUPN? Visit HoldingsChannel.com to get the latest 13F filings and insider trades for Supernus Pharmaceuticals Inc (NASDAQ:SUPN). 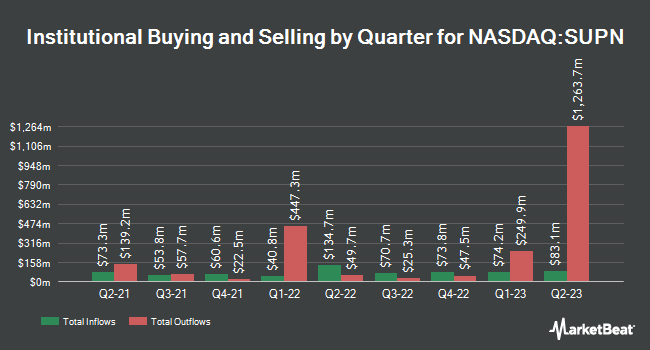 Apollon Trading Down 2.2% Over Last 7 Days