PACCAR (NASDAQ:PCAR) last announced its quarterly earnings data on Tuesday, April 21st. The company reported $1.03 EPS for the quarter, missing the consensus estimate of $1.21 by ($0.18). The firm had revenue of $4.78 billion for the quarter, compared to analysts’ expectations of $4.89 billion. PACCAR had a net margin of 8.73% and a return on equity of 21.76%. The business’s quarterly revenue was down 22.2% compared to the same quarter last year. During the same period in the prior year, the business posted $1.81 EPS. On average, analysts expect that PACCAR will post 2.88 EPS for the current fiscal year.

The business also recently declared a quarterly dividend, which was paid on Tuesday, June 2nd. Investors of record on Tuesday, May 12th were issued a dividend of $0.32 per share. The ex-dividend date of this dividend was Monday, May 11th. This represents a $1.28 annualized dividend and a yield of 1.77%. PACCAR’s payout ratio is presently 18.63%.

PACCAR Inc designs, manufactures, and distributes light, medium, and heavy-duty commercial trucks in the United States, Europe, and internationally. The company operates in three segments: Truck, Parts, and Financial Services. The Truck segment designs, manufactures, and distributes trucks that are used for the over-the-road and off-highway hauling of commercial and consumer goods. 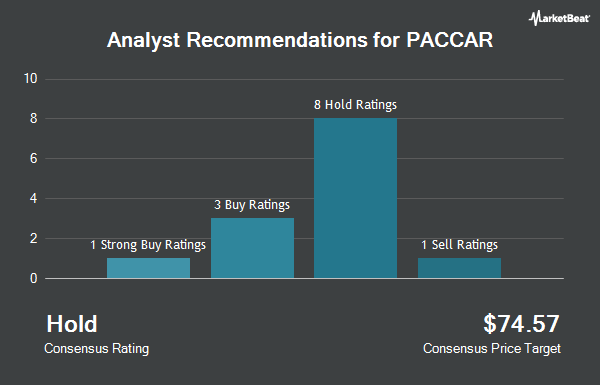 Receive News & Ratings for PACCAR Daily - Enter your email address below to receive a concise daily summary of the latest news and analysts' ratings for PACCAR and related companies with MarketBeat.com's FREE daily email newsletter.