IAMGOLD (NYSE:IAG) Raised to “Outperform” at Royal Bank of Canada

January 14th, 2021 - Comments Off on IAMGOLD (NYSE:IAG) Raised to “Outperform” at Royal Bank of Canada - Filed Under - by Jeff Wilder
Filed Under: Finance
Tweet

IAMGOLD (NYSE:IAG) (TSE:IMG) was upgraded by equities research analysts at Royal Bank of Canada to an “outperform” rating in a report issued on Thursday, Stock Target Advisor reports.

Other analysts have also recently issued research reports about the stock. Zacks Investment Research cut shares of IAMGOLD from a “hold” rating to a “sell” rating in a research note on Thursday, January 7th. Credit Suisse Group reaffirmed a “neutral” rating and set a $4.75 price objective on shares of IAMGOLD in a report on Thursday, November 5th. CSFB set a $4.75 target price on IAMGOLD and gave the stock a “neutral” rating in a report on Thursday, November 5th. National Bank Financial reaffirmed an “outperform” rating on shares of IAMGOLD in a report on Monday. Finally, Raymond James cut their price objective on IAMGOLD from $6.50 to $6.00 and set a “market perform” rating for the company in a research report on Monday, November 16th. Two research analysts have rated the stock with a sell rating, five have given a hold rating and six have issued a buy rating to the company’s stock. IAMGOLD presently has a consensus rating of “Hold” and an average target price of $12.31.

IAMGOLD (NYSE:IAG) (TSE:IMG) last posted its quarterly earnings data on Wednesday, November 4th. The mining company reported $0.11 earnings per share (EPS) for the quarter, topping the Thomson Reuters’ consensus estimate of $0.09 by $0.02. IAMGOLD had a negative net margin of 31.53% and a positive return on equity of 2.79%. The business had revenue of $335.10 million during the quarter, compared to the consensus estimate of $344.16 million. IAMGOLD’s quarterly revenue was up 22.1% on a year-over-year basis. On average, sell-side analysts forecast that IAMGOLD will post 0.26 earnings per share for the current fiscal year.

IAMGOLD Corporation explores for, develops, and operates gold mining properties in North and South America, and West Africa. The company owns interests in the Rosebel mine located in Suriname, South America; the Essakane mine in Burkina Faso, West Africa; the Westwood mine in Quebec, Canada. Its exploration and development projects include the Boto gold project in Senegal; the Diakha-Siribaya gold project in Mali; the Pitangui project in Brazil; the CÃ´tÃ© gold project in Ontario; Eastern Borosi in Nicaragua; and the Karita gold project in Guinea, as well as holds interest in the Loma Larga, a gold, silver, and copper project in southern Ecuador.

See Also: The Structure of a Futures Contract 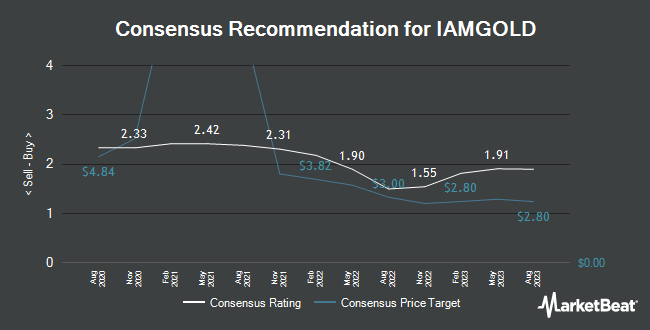 Receive News & Ratings for IAMGOLD Daily - Enter your email address below to receive a concise daily summary of the latest news and analysts' ratings for IAMGOLD and related companies with MarketBeat.com's FREE daily email newsletter.

$14.00 Million in Sales Expected for G1 Therapeutics, Inc. This Quarter