Squarepoint Ops LLC increased its holdings in shares of Carrols Restaurant Group, Inc. (NASDAQ:TAST) by 44.5% in the fourth quarter, Holdings Channel.com reports. The fund owned 130,050 shares of the restaurant operator’s stock after buying an additional 40,074 shares during the quarter. Squarepoint Ops LLC’s holdings in Carrols Restaurant Group were worth $817,000 at the end of the most recent quarter.

Several research analysts have commented on TAST shares. Zacks Investment Research downgraded Carrols Restaurant Group from a “hold” rating to a “sell” rating in a report on Thursday, March 18th. Stephens cut their price target on Carrols Restaurant Group from $7.50 to $7.00 and set an “overweight” rating on the stock in a report on Wednesday, March 10th. Finally, Deutsche Bank Aktiengesellschaft boosted their target price on Carrols Restaurant Group from $7.00 to $8.00 and gave the stock a “buy” rating in a research note on Friday, January 15th. One equities research analyst has rated the stock with a sell rating and six have given a buy rating to the company. The company presently has an average rating of “Buy” and an average price target of $7.57.

In other news, Director Matthew Terker Perelman purchased 75,000 shares of the stock in a transaction on Monday, March 8th. The stock was bought at an average price of $6.60 per share, with a total value of $495,000.00. Following the transaction, the director now owns 181,324 shares in the company, valued at approximately $1,196,738.40. The purchase was disclosed in a legal filing with the Securities & Exchange Commission, which can be accessed through this hyperlink. Insiders own 22.00% of the company’s stock.

Further Reading: What is a Secondary Public Offering?

Want to see what other hedge funds are holding TAST? Visit HoldingsChannel.com to get the latest 13F filings and insider trades for Carrols Restaurant Group, Inc. (NASDAQ:TAST). 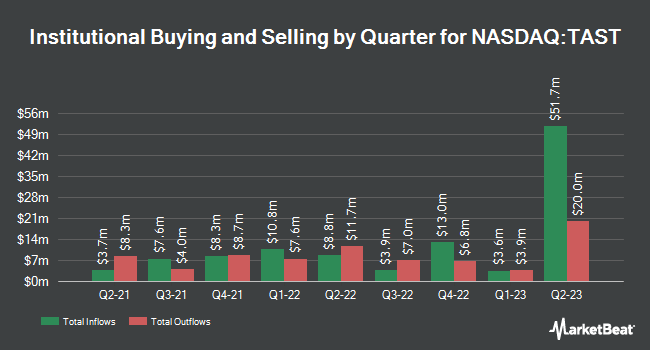