Analysts expect that Diamondback Energy, Inc. (NASDAQ:FANG) will report sales of $1.31 billion for the current fiscal quarter, according to Zacks. Seven analysts have provided estimates for Diamondback Energy’s earnings. The highest sales estimate is $1.48 billion and the lowest is $1.22 billion. Diamondback Energy posted sales of $425.00 million during the same quarter last year, which suggests a positive year-over-year growth rate of 208.2%. The business is expected to issue its next earnings report on Monday, August 2nd.

According to Zacks, analysts expect that Diamondback Energy will report full-year sales of $4.85 billion for the current year, with estimates ranging from $3.91 billion to $5.62 billion. For the next financial year, analysts forecast that the company will post sales of $5.56 billion, with estimates ranging from $4.92 billion to $6.87 billion. Zacks’ sales calculations are a mean average based on a survey of analysts that cover Diamondback Energy.

Diamondback Energy (NASDAQ:FANG) last announced its quarterly earnings results on Sunday, May 2nd. The oil and natural gas company reported $2.30 earnings per share (EPS) for the quarter, topping analysts’ consensus estimates of $1.73 by $0.57. The firm had revenue of $1.18 billion for the quarter, compared to the consensus estimate of $864.18 million. Diamondback Energy had a negative net margin of 135.48% and a positive return on equity of 5.10%. The company’s revenue for the quarter was up 31.7% on a year-over-year basis. During the same period in the prior year, the firm posted $1.45 earnings per share.

The firm also recently disclosed a quarterly dividend, which was paid on Thursday, March 11th. Investors of record on Thursday, March 4th were issued a $0.40 dividend. This represents a $1.60 annualized dividend and a yield of 2.02%. This is an increase from Diamondback Energy’s previous quarterly dividend of $0.38. The ex-dividend date was Wednesday, March 3rd. Diamondback Energy’s dividend payout ratio (DPR) is presently 23.09%.

Diamondback Energy, Inc, an independent oil and natural gas company, focuses on the acquisition, development, exploration, and exploitation of unconventional and onshore oil and natural gas reserves in the Permian Basin in West Texas. It primarily focuses on the development of the Spraberry and Wolfcamp formations of the Midland basin; and the Wolfcamp and Bone Spring formations of the Delaware basin, which are part of the Permian Basin in West Texas and New Mexico. 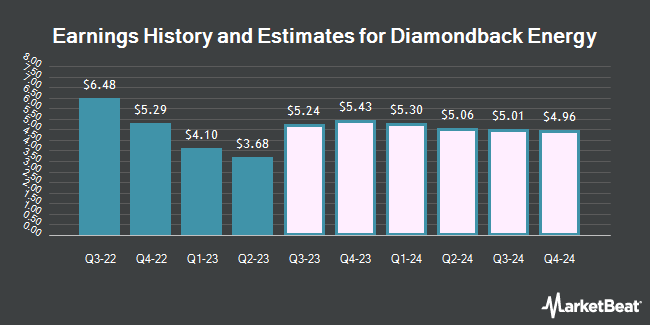