TrueCar, Inc. (NASDAQ:TRUE) Given Average Recommendation of “Buy” by Brokerages

TrueCar, Inc. (NASDAQ:TRUE) has been assigned a consensus rating of “Buy” from the thirteen analysts that are presently covering the stock, MarketBeat Ratings reports. Four equities research analysts have rated the stock with a hold recommendation and five have given a buy recommendation to the company. The average 1-year target price among brokerages that have issued a report on the stock in the last year is $5.97.

TrueCar, Inc operates as an internet-based information, technology, and communication services company in the United States. It operates its platform on the TrueCar website and mobile applications. Its platform enables users to obtain market-based pricing data on new and used cars, and to connect with its network of TrueCar certified dealers.

Recommended Story: What is an economic bubble? 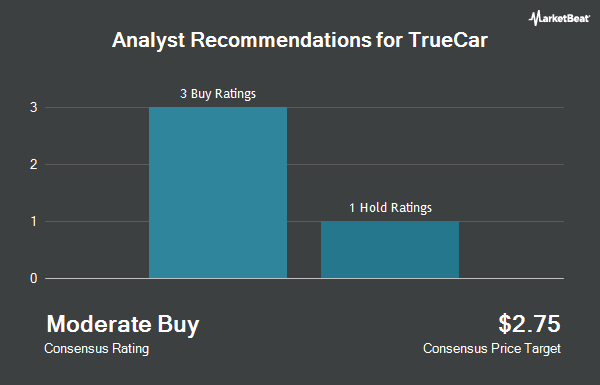 Receive News & Ratings for TrueCar Daily - Enter your email address below to receive a concise daily summary of the latest news and analysts' ratings for TrueCar and related companies with MarketBeat.com's FREE daily email newsletter.

Complete the form below to receive the latest headlines and analysts' recommendations for TrueCar with our free daily email newsletter: