Eldorado Gold (NYSE:EGO) (TSE:ELD) was upgraded by Zacks Investment Research from a “hold” rating to a “buy” rating in a report released on Tuesday, Zacks.com reports. The brokerage presently has a $9.50 target price on the basic materials company’s stock. Zacks Investment Research‘s target price would suggest a potential upside of 12.16% from the company’s current price.

According to Zacks, “Eldorado Gold is a gold producing and exploration company with gold assets in Brazil and Turkey. “

Eldorado Gold (NYSE:EGO) (TSE:ELD) last announced its quarterly earnings results on Thursday, July 29th. The basic materials company reported $0.16 earnings per share for the quarter, beating analysts’ consensus estimates of $0.11 by $0.05. Eldorado Gold had a net margin of 1.60% and a return on equity of 4.49%. The firm had revenue of $233.22 million during the quarter. As a group, analysts expect that Eldorado Gold will post 0.56 earnings per share for the current fiscal year.

Eldorado Gold Corp. engages in the mining, development and exploration of gold. It has mining operations, ongoing development projects and exploration in Turkey, Canada, Greece, Brazil, Romania and Serbia. The company was founded by Richard J. Barclay, Marco Antonio Romero, and Gary D. Nordin on April 2, 1992 and is headquartered in Vancouver, Canada. 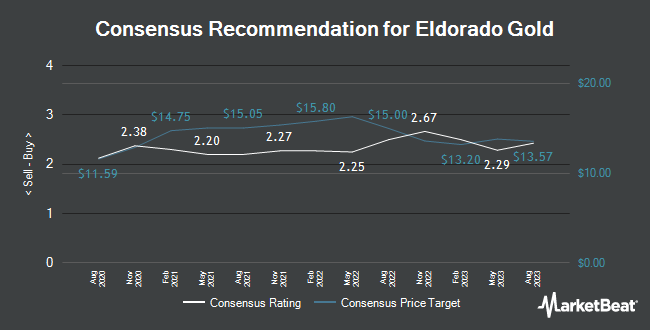 SingularDTV Trading Down 4.3% Over Last 7 Days

Complete the form below to receive the latest headlines and analysts' recommendations for Eldorado Gold with our free daily email newsletter: