Wakefield Asset Management LLLP grew its holdings in Williams-Sonoma, Inc. (NYSE:WSM) by 0.6% in the 2nd quarter, Holdings Channel reports. The fund owned 12,794 shares of the specialty retailer’s stock after purchasing an additional 81 shares during the quarter. Wakefield Asset Management LLLP’s holdings in Williams-Sonoma were worth $2,043,000 at the end of the most recent quarter.

Williams-Sonoma (NYSE:WSM) last issued its quarterly earnings data on Tuesday, August 24th. The specialty retailer reported $3.24 earnings per share for the quarter, topping analysts’ consensus estimates of $2.55 by $0.69. The business had revenue of $1.95 billion for the quarter, compared to analyst estimates of $1.80 billion. Williams-Sonoma had a return on equity of 65.88% and a net margin of 12.70%. Williams-Sonoma’s quarterly revenue was up 30.7% compared to the same quarter last year. During the same quarter in the previous year, the company posted $1.80 EPS. As a group, equities analysts forecast that Williams-Sonoma, Inc. will post 13.22 EPS for the current year.

The company also recently disclosed a quarterly dividend, which will be paid on Friday, November 26th. Investors of record on Friday, October 22nd will be given a dividend of $0.71 per share. The ex-dividend date is Thursday, October 21st. This represents a $2.84 dividend on an annualized basis and a yield of 1.57%. This is a positive change from Williams-Sonoma’s previous quarterly dividend of $0.59. Williams-Sonoma’s payout ratio is currently 26.11%.

In other Williams-Sonoma news, insider Ryan Ross sold 2,400 shares of Williams-Sonoma stock in a transaction dated Wednesday, July 7th. The stock was sold at an average price of $165.00, for a total transaction of $396,000.00. The sale was disclosed in a filing with the SEC, which is available through this hyperlink. Also, EVP David Randolph King sold 7,450 shares of the business’s stock in a transaction dated Monday, August 30th. The shares were sold at an average price of $186.55, for a total value of $1,389,797.50. Following the completion of the transaction, the executive vice president now directly owns 30,437 shares in the company, valued at $5,678,022.35. The disclosure for this sale can be found here. Insiders have sold a total of 45,450 shares of company stock worth $7,608,650 in the last 90 days. 1.60% of the stock is currently owned by corporate insiders.

Williams-Sonoma, Inc engages in the retailing of home products. It operates through the following segments: Pottery Barn, West Elm, Williams Sonoma, Pottery Barn Kids and Teen and Other. The Other segment includes net revenues from international franchise operations, Rejuvenation and Mark and Graham.

Recommended Story: Trading Options- What is a Strangle?

Want to see what other hedge funds are holding WSM? Visit HoldingsChannel.com to get the latest 13F filings and insider trades for Williams-Sonoma, Inc. (NYSE:WSM). 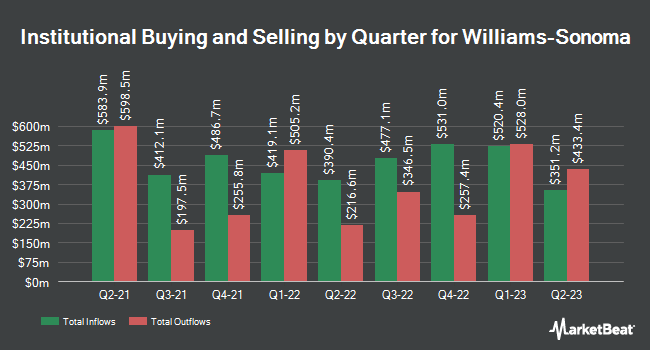 Complete the form below to receive the latest headlines and analysts' recommendations for Williams-Sonoma with our free daily email newsletter: