Equities research analysts expect that Concrete Pumping Holdings, Inc. (NASDAQ:BBCP) will report sales of $83.22 million for the current fiscal quarter, according to Zacks. Two analysts have provided estimates for Concrete Pumping’s earnings. The highest sales estimate is $84.75 million and the lowest is $81.70 million. Concrete Pumping posted sales of $79.19 million in the same quarter last year, which would indicate a positive year over year growth rate of 5.1%. The firm is expected to announce its next earnings report on Tuesday, January 11th.

According to Zacks, analysts expect that Concrete Pumping will report full-year sales of $311.25 million for the current year, with estimates ranging from $309.70 million to $312.80 million. For the next fiscal year, analysts expect that the business will report sales of $333.99 million, with estimates ranging from $326.30 million to $341.68 million. Zacks’ sales averages are a mean average based on a survey of sell-side analysts that follow Concrete Pumping.

A number of analysts recently issued reports on BBCP shares. Zacks Investment Research raised Concrete Pumping from a “sell” rating to a “hold” rating in a research report on Wednesday, August 18th. Robert W. Baird reissued a “buy” rating and set a $11.00 price target on shares of Concrete Pumping in a research report on Sunday, September 12th. Finally, UBS Group raised Concrete Pumping from a “neutral” rating to a “buy” rating and boosted their price target for the stock from $6.00 to $11.00 in a research report on Friday, June 25th. One investment analyst has rated the stock with a hold rating and four have given a buy rating to the stock. According to MarketBeat.com, the company presently has an average rating of “Buy” and an average target price of $8.35.

Concrete Pumping Holdings, Inc provides concrete pumping and waste management services in the United States and the United Kingdom. The company offers concrete pumping services to general contractors and concrete finishing companies in the commercial, infrastructure, and residential sectors under the Brundage-Bone and Camfaud brands; and industrial cleanup and containment services primarily to customers in the construction industry under the Eco-Pan brand.

Further Reading: How to execute a trade ex-dividend strategy? 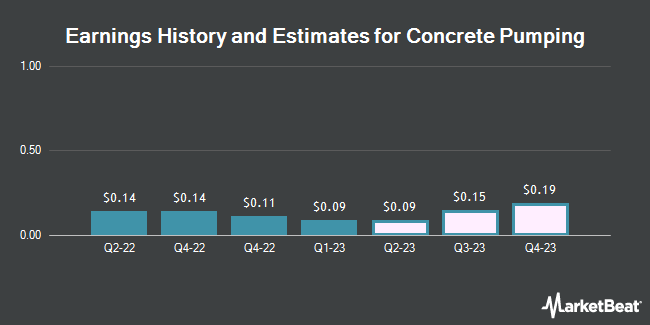 MOBOX Trading Up 0.4% Over Last Week

Complete the form below to receive the latest headlines and analysts' recommendations for Concrete Pumping with our free daily email newsletter: