Brokerages forecast that Unity Software Inc. (NYSE:U) will announce earnings per share (EPS) of ($0.06) for the current quarter, Zacks Investment Research reports. Five analysts have issued estimates for Unity Software’s earnings, with the lowest EPS estimate coming in at ($0.09) and the highest estimate coming in at ($0.04). Unity Software posted earnings of ($0.09) per share in the same quarter last year, which suggests a positive year-over-year growth rate of 33.3%. The business is scheduled to announce its next quarterly earnings report on Thursday, November 11th.

According to Zacks, analysts expect that Unity Software will report full year earnings of ($0.23) per share for the current year, with EPS estimates ranging from ($0.27) to ($0.19). For the next fiscal year, analysts anticipate that the firm will report earnings of ($0.12) per share, with EPS estimates ranging from ($0.29) to $0.15. Zacks’ earnings per share averages are an average based on a survey of research firms that follow Unity Software.

Unity Software (NYSE:U) last released its earnings results on Tuesday, August 10th. The company reported ($0.02) earnings per share (EPS) for the quarter, topping the Zacks’ consensus estimate of ($0.31) by $0.29. Unity Software had a negative net margin of 52.08% and a negative return on equity of 17.16%. The business had revenue of $273.56 million during the quarter, compared to analyst estimates of $242.75 million. During the same quarter in the prior year, the firm earned ($0.09) earnings per share. The company’s revenue for the quarter was up 48.4% compared to the same quarter last year. 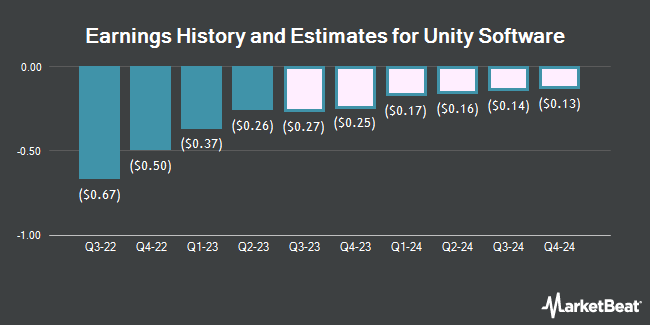 Cred Price Down 2.7% Over Last Week

$546.46 Million in Sales Expected for Amneal Pharmaceuticals, Inc. This Quarter

Wynn Resorts, Limited Given Consensus Rating of “Hold” by Brokerages