uniQure (NASDAQ:QURE) VP Alexander Edward Kuta III sold 2,229 shares of the business’s stock in a transaction that occurred on Tuesday, September 21st. The stock was sold at an average price of $36.71, for a total value of $81,826.59. The transaction was disclosed in a document filed with the SEC, which can be accessed through the SEC website.

uniQure (NASDAQ:QURE) last posted its quarterly earnings data on Sunday, July 25th. The biotechnology company reported $8.51 EPS for the quarter, topping the Zacks’ consensus estimate of $2.97 by $5.54. The firm had revenue of $463.87 million for the quarter, compared to analyst estimates of $212.65 million. uniQure had a return on equity of 90.98% and a net margin of 60.66%. Sell-side analysts forecast that uniQure will post 6.23 earnings per share for the current fiscal year.

uniQure NV engages in the research, development, and commercialization of gene therapies. Its discoveries intend to treat hemophilia, Huntington’s disease, glybera, and cardiovascular problems. The company was founded by Sander J. van Deventer in 1998 and is headquartered in Amsterdam, the Netherlands.

Recommended Story: Is it Safe to Invest in Commodities? 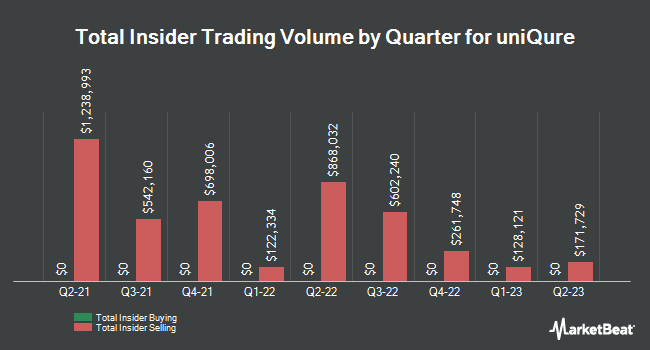 Receive News & Ratings for uniQure Daily - Enter your email address below to receive a concise daily summary of the latest news and analysts' ratings for uniQure and related companies with MarketBeat.com's FREE daily email newsletter.

Complete the form below to receive the latest headlines and analysts' recommendations for uniQure with our free daily email newsletter: