On average, analysts expect that Atlantic Capital Bancshares will report full year sales of $113.56 million for the current year, with estimates ranging from $109.10 million to $116.00 million. For the next financial year, analysts anticipate that the business will report sales of $119.00 million, with estimates ranging from $113.00 million to $122.30 million. Zacks’ sales calculations are an average based on a survey of research analysts that that provide coverage for Atlantic Capital Bancshares.

Atlantic Capital Bancshares (NASDAQ:ACBI) last announced its quarterly earnings data on Thursday, July 22nd. The bank reported $0.58 earnings per share for the quarter, beating the consensus estimate of $0.52 by $0.06. Atlantic Capital Bancshares had a net margin of 38.08% and a return on equity of 12.75%. The firm had revenue of $29.24 million for the quarter, compared to analyst estimates of $28.23 million.

In related news, Director James H. Graves sold 8,000 shares of the firm’s stock in a transaction that occurred on Tuesday, August 10th. The shares were sold at an average price of $25.14, for a total value of $201,120.00. Following the completion of the transaction, the director now directly owns 6,258 shares of the company’s stock, valued at approximately $157,326.12. The transaction was disclosed in a legal filing with the SEC, which can be accessed through this link. 4.40% of the stock is currently owned by company insiders.

Atlantic Capital Bancshares, Inc is a holding company, which engages in the provision of commercial banking services. The company offers an array of credit, treasury management, and deposit products and services. It also provides capital markets, mortgage banking, and electronic banking services to its corporate, business, and individual clients. 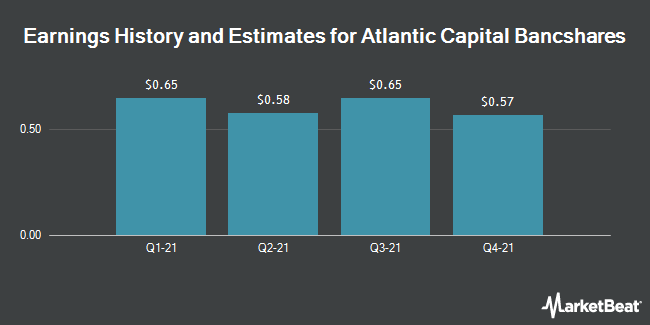 Complete the form below to receive the latest headlines and analysts' recommendations for Atlantic Capital Bancshares with our free daily email newsletter: