Yext, Inc. (NYSE:YEXT) CFO Steven Cakebread sold 7,483 shares of the firm’s stock in a transaction that occurred on Monday, September 20th. The stock was sold at an average price of $12.25, for a total transaction of $91,666.75. The transaction was disclosed in a filing with the SEC, which is accessible through the SEC website.

Yext (NYSE:YEXT) last posted its quarterly earnings data on Wednesday, September 1st. The company reported ($0.06) EPS for the quarter, topping the consensus estimate of ($0.07) by $0.01. Yext had a negative net margin of 23.04% and a negative return on equity of 40.48%. The company had revenue of $98.12 million during the quarter, compared to analyst estimates of $95.05 million. During the same period in the previous year, the firm earned ($0.07) earnings per share. Yext’s quarterly revenue was up 11.4% compared to the same quarter last year. As a group, research analysts anticipate that Yext, Inc. will post -0.8 EPS for the current fiscal year.

Yext, Inc is an emerging growth company engages in software development. It offers a cloud-based digital knowledge platform, which allows businesses manage their digital knowledge in the cloud such as financial information, resources and performance of these resources on a consolidated basis and sync it to other application such as Apple Maps, Bing, Cortana, Facebook, Google, Google Maps, Instagram, Siri and Yelp.

Featured Story: How to build a Fibonacci channel 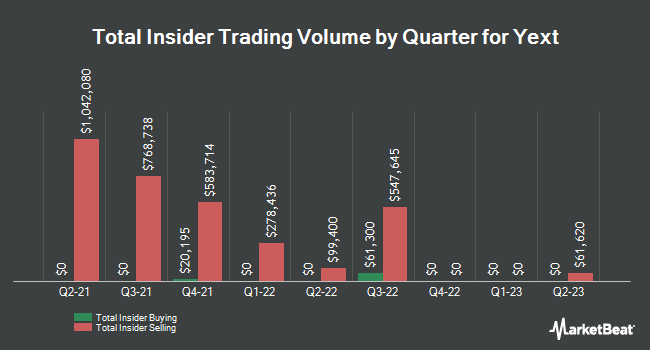 Receive News & Ratings for Yext Daily - Enter your email address below to receive a concise daily summary of the latest news and analysts' ratings for Yext and related companies with MarketBeat.com's FREE daily email newsletter.

Complete the form below to receive the latest headlines and analysts' recommendations for Yext with our free daily email newsletter: