Brokerages expect Ameris Bancorp (NASDAQ:ABCB) to report $247.86 million in sales for the current quarter, according to Zacks Investment Research. Four analysts have issued estimates for Ameris Bancorp’s earnings. The lowest sales estimate is $243.12 million and the highest is $251.20 million. Ameris Bancorp reported sales of $321.56 million in the same quarter last year, which suggests a negative year-over-year growth rate of 22.9%. The business is expected to announce its next earnings report on Thursday, October 28th.

On average, analysts expect that Ameris Bancorp will report full year sales of $1.02 billion for the current fiscal year, with estimates ranging from $1.00 billion to $1.03 billion. For the next year, analysts expect that the firm will report sales of $977.35 million, with estimates ranging from $942.18 million to $1.01 billion. Zacks Investment Research’s sales averages are an average based on a survey of research firms that follow Ameris Bancorp.

Ameris Bancorp (NASDAQ:ABCB) last announced its earnings results on Wednesday, July 21st. The bank reported $1.25 EPS for the quarter, topping the consensus estimate of $1.20 by $0.05. The company had revenue of $251.09 million for the quarter, compared to analysts’ expectations of $263.83 million. Ameris Bancorp had a return on equity of 15.63% and a net margin of 35.64%. During the same quarter in the prior year, the business earned $0.61 earnings per share.

ABCB has been the topic of a number of research analyst reports. Zacks Investment Research lowered Ameris Bancorp from a “buy” rating to a “hold” rating in a research report on Monday, July 12th. Stephens lowered Ameris Bancorp from an “overweight” rating to an “equal weight” rating and set a $56.00 target price on the stock. in a research report on Thursday, September 30th. Three analysts have rated the stock with a hold rating and two have assigned a buy rating to the stock. According to data from MarketBeat.com, the company currently has a consensus rating of “Hold” and a consensus price target of $54.00.

In other Ameris Bancorp news, CEO H Palmer Proctor, Jr. purchased 2,500 shares of the firm’s stock in a transaction that occurred on Tuesday, July 27th. The stock was bought at an average cost of $46.71 per share, with a total value of $116,775.00. The purchase was disclosed in a document filed with the Securities & Exchange Commission, which is available at this hyperlink. Company insiders own 5.50% of the company’s stock.

The business also recently disclosed a quarterly dividend, which was paid on Friday, October 8th. Stockholders of record on Thursday, September 30th were paid a $0.15 dividend. This represents a $0.60 annualized dividend and a dividend yield of 1.15%. The ex-dividend date of this dividend was Wednesday, September 29th. Ameris Bancorp’s dividend payout ratio (DPR) is presently 13.86%.

Ameris Bancorp is a bank holding company, which through the subsidiary, Ameris Bank, engages in the provision of banking services to its retail and commercial customers. It operates through the following business segments: Banking, Retail Mortgage, Warehouse Lending, the SBA and Premium Finance. The Banking segment offers full service financial services to include commercial loans, consumer loans and deposit accounts.

Recommended Story: The components of the Stochastic Momentum Index 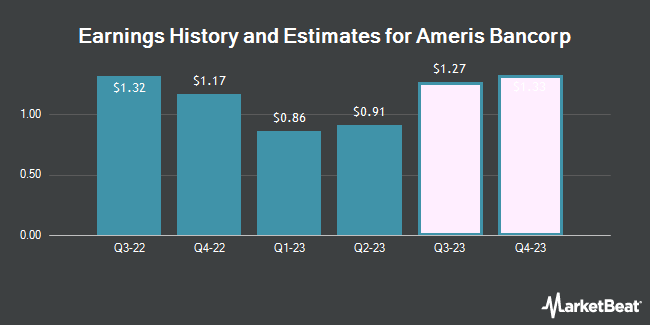 $678.37 Million in Sales Expected for FTI Consulting, Inc. This Quarter

Complete the form below to receive the latest headlines and analysts' recommendations for Ameris Bancorp with our free daily email newsletter: