State Street Corp boosted its holdings in Oportun Financial Co. (NASDAQ:OPRT) by 31.9% in the second quarter, Holdings Channel reports. The institutional investor owned 444,493 shares of the company’s stock after buying an additional 107,458 shares during the period. State Street Corp’s holdings in Oportun Financial were worth $8,903,000 at the end of the most recent quarter.

In related news, CFO Jonathan Aaron Coblentz sold 10,400 shares of the firm’s stock in a transaction that occurred on Thursday, November 11th. The stock was sold at an average price of $27.50, for a total transaction of $286,000.00. The sale was disclosed in a document filed with the Securities & Exchange Commission, which is available through this link. Also, insider Patrick Kirscht sold 2,000 shares of Oportun Financial stock in a transaction on Friday, September 10th. The shares were sold at an average price of $24.63, for a total value of $49,260.00. Following the sale, the insider now directly owns 142,942 shares of the company’s stock, valued at $3,520,661.46. The disclosure for this sale can be found here. Insiders have sold 28,605 shares of company stock worth $745,185 over the last three months. Insiders own 12.60% of the company’s stock.

Oportun Financial (NASDAQ:OPRT) last posted its earnings results on Wednesday, November 3rd. The company reported $0.78 earnings per share (EPS) for the quarter, beating the Thomson Reuters’ consensus estimate of $0.31 by $0.47. Oportun Financial had a return on equity of 19.91% and a net margin of 7.27%. During the same quarter in the previous year, the firm earned ($0.04) EPS. As a group, sell-side analysts forecast that Oportun Financial Co. will post 2.03 EPS for the current fiscal year.

Recommended Story: How to Use the MarketBeat Retirement Calculator

Want to see what other hedge funds are holding OPRT? Visit HoldingsChannel.com to get the latest 13F filings and insider trades for Oportun Financial Co. (NASDAQ:OPRT). 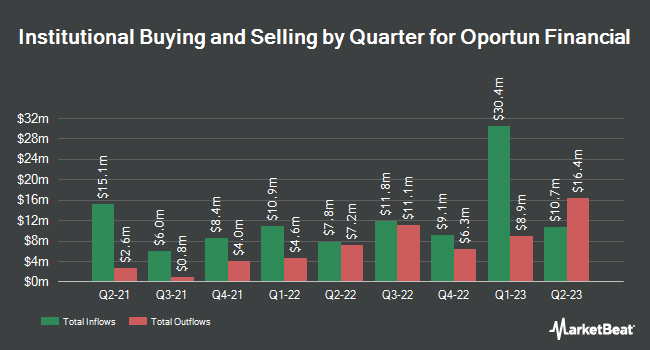 Complete the form below to receive the latest headlines and analysts' recommendations for Oportun Financial with our free daily email newsletter: