EQT (NYSE:EQT) last issued its quarterly earnings results on Tuesday, October 26th. The oil and gas producer reported $0.12 EPS for the quarter, topping the consensus estimate of ($0.05) by $0.17. The business had revenue of $1.16 billion during the quarter, compared to the consensus estimate of $1.09 billion. During the same quarter last year, the firm posted ($0.15) earnings per share. As a group, analysts expect that EQT Co. will post 1.03 earnings per share for the current fiscal year.

EQT announced that its board has initiated a stock buyback program on Monday, December 13th that authorizes the company to buyback $1.00 billion in outstanding shares. This buyback authorization authorizes the oil and gas producer to buy up to 13.2% of its stock through open market purchases. Stock buyback programs are often an indication that the company’s management believes its shares are undervalued.

EQT Corp. engages in natural gas production, gathering and transmission in the Appalachian area. It has operations in Marcellus and Utica Shales of the Appalachian Basin. The company was founded in 1888 and is headquartered in Pittsburgh, PA.

Want to see what other hedge funds are holding EQT? Visit HoldingsChannel.com to get the latest 13F filings and insider trades for EQT Co. (NYSE:EQT). 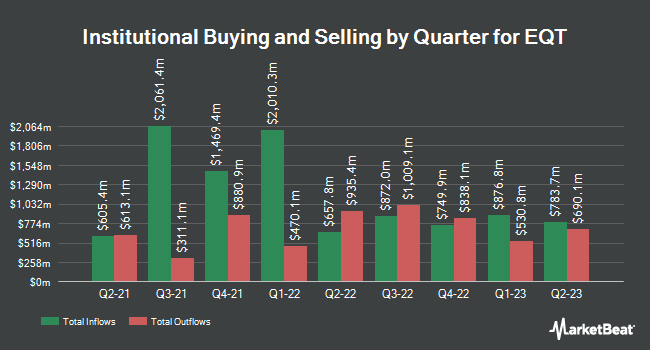 Receive News & Ratings for EQT Daily - Enter your email address below to receive a concise daily summary of the latest news and analysts' ratings for EQT and related companies with MarketBeat.com's FREE daily email newsletter.

US Bancorp DE Sells 276 Shares of Everest Re Group, Ltd.

Complete the form below to receive the latest headlines and analysts' recommendations for EQT with our free daily email newsletter: