Hawaiian (NASDAQ:HA) was upgraded by equities researchers at Cowen from an “underperform” rating to a “market perform” rating in a report issued on Thursday, Analyst Ratings Network reports. The firm presently has a $23.00 target price on the transportation company’s stock, up from their previous target price of $17.50. Cowen’s target price would indicate a potential upside of 13.97% from the stock’s current price.

A number of other equities analysts also recently weighed in on HA. Wolfe Research downgraded Hawaiian from an “outperform” rating to a “peer perform” rating in a research report on Wednesday, October 6th. They noted that the move was a valuation call. Zacks Investment Research raised Hawaiian from a “sell” rating to a “hold” rating and set a $20.00 price target for the company in a research report on Monday, December 13th. Two investment analysts have rated the stock with a sell rating, five have assigned a hold rating and one has given a buy rating to the stock. According to MarketBeat.com, the company presently has an average rating of “Hold” and a consensus price target of $24.71.

Hawaiian (NASDAQ:HA) last issued its quarterly earnings data on Tuesday, October 26th. The transportation company reported ($0.95) earnings per share (EPS) for the quarter, beating the Thomson Reuters’ consensus estimate of ($1.29) by $0.34. Hawaiian had a negative return on equity of 79.33% and a negative net margin of 17.16%. The business had revenue of $180.41 million during the quarter, compared to analyst estimates of $488.82 million. During the same period in the previous year, the firm earned ($3.76) EPS. Hawaiian’s quarterly revenue was up 137.4% compared to the same quarter last year. Equities research analysts predict that Hawaiian will post -7.88 EPS for the current fiscal year.

Hawaiian Holdings, Inc is a holding company, which engages in the provision of air transportation services. It offers cargo handling and passenger flights between the Hawaiian Islands and its neighbor island routes through its subsidiary, Hawaiian Airlines, Inc The company was founded on January 30, 1929 and is headquartered in Honolulu, HI. 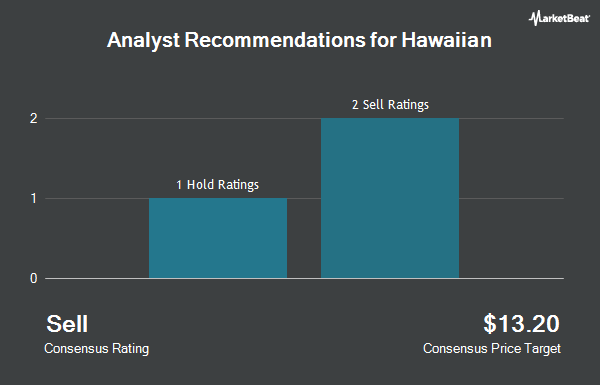 Receive News & Ratings for Hawaiian Daily - Enter your email address below to receive a concise daily summary of the latest news and analysts' ratings for Hawaiian and related companies with MarketBeat.com's FREE daily email newsletter.

Complete the form below to receive the latest headlines and analysts' recommendations for Hawaiian with our free daily email newsletter: