Krispy Kreme (NASDAQ:DNUT – Get Rating) last posted its quarterly earnings results on Tuesday, February 22nd. The company reported $0.05 earnings per share for the quarter, missing the consensus estimate of $0.06 by ($0.01). Krispy Kreme had a negative net margin of 1.22% and a positive return on equity of 3.45%. The company had revenue of $370.60 million for the quarter, compared to the consensus estimate of $363.04 million. The firm’s revenue was up 13.8% compared to the same quarter last year. As a group, analysts predict that Krispy Kreme will post 0.28 earnings per share for the current year.

In other news, CEO Michael J. Tattersfield purchased 9,500 shares of the business’s stock in a transaction on Thursday, March 10th. The shares were acquired at an average cost of $13.95 per share, with a total value of $132,525.00. The transaction was disclosed in a legal filing with the Securities & Exchange Commission, which is available at this hyperlink.

Krispy Kreme, Inc, together with its subsidiaries, operates through an omni-channel business model to provide doughnut experiences and produce doughnuts. The company operates through three segments: U.S. and Canada, International, and Market Development. It also produces cookies, brownies, cookie cakes, ice cream, cookie-wiches, and cold milk, as well as doughnut mixes, other ingredients, and doughnut-making equipment. 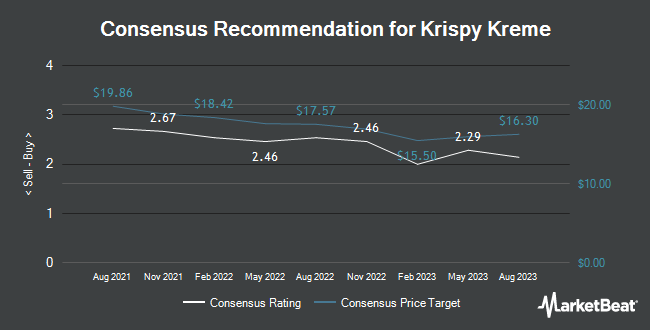 $3.81 Earnings Per Share Expected for United Therapeutics Co. This Quarter

Complete the form below to receive the latest headlines and analysts' recommendations for Krispy Kreme with our free daily email newsletter: