Union Pacific (NYSE:UNP – Get Rating) last released its quarterly earnings data on Thursday, April 21st. The railroad operator reported $2.57 earnings per share (EPS) for the quarter, topping the consensus estimate of $2.55 by $0.02. The firm had revenue of $5.86 billion during the quarter, compared to analysts’ expectations of $5.76 billion. Union Pacific had a net margin of 30.06% and a return on equity of 50.20%. Union Pacific’s revenue was up 17.2% compared to the same quarter last year. During the same period last year, the business earned $2.00 earnings per share. As a group, equities research analysts expect that Union Pacific will post 11.64 EPS for the current year.

Union Pacific declared that its board has approved a stock buyback plan on Thursday, February 3rd that allows the company to repurchase 100,000,000 shares. This repurchase authorization allows the railroad operator to buy shares of its stock through open market purchases. Shares repurchase plans are usually an indication that the company’s board believes its stock is undervalued.

In other Union Pacific news, EVP Kenyatta G. Rocker sold 4,018 shares of the business’s stock in a transaction on Thursday, April 21st. The shares were sold at an average price of $250.00, for a total value of $1,004,500.00. Following the transaction, the executive vice president now directly owns 41,177 shares of the company’s stock, valued at approximately $10,294,250. The sale was disclosed in a filing with the Securities & Exchange Commission, which is accessible through this link. Insiders own 0.28% of the company’s stock. 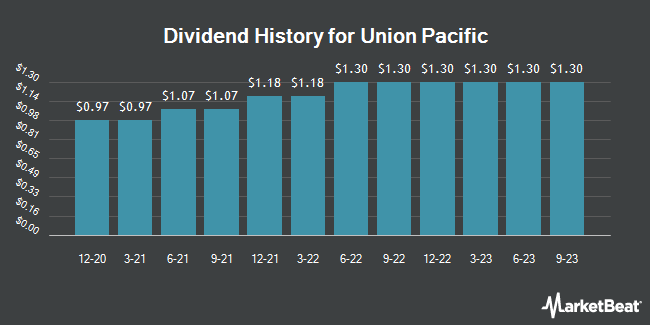 Weyerhaeuser to Issue Quarterly Dividend of $0.18 on June 17th

The Character Group plc to Issue Dividend of GBX 7

Complete the form below to receive the latest headlines and analysts' recommendations for Union Pacific with our free daily email newsletter: