BJ’s Wholesale Club (NYSE:BJ – Get Rating) released its quarterly earnings data on Thursday. The company reported $0.87 earnings per share for the quarter, topping the consensus estimate of $0.72 by $0.15, Briefing.com reports. The business had revenue of $4.50 billion during the quarter, compared to analyst estimates of $4.24 billion. BJ’s Wholesale Club had a return on equity of 77.13% and a net margin of 2.65%. The company’s revenue was up 16.2% compared to the same quarter last year. During the same period last year, the company posted $0.72 EPS. BJ’s Wholesale Club updated its FY23 guidance to flat yr/yr EPS.

In other BJ’s Wholesale Club news, Director Kenneth M. Parent sold 35,004 shares of the stock in a transaction on Tuesday, April 5th. The shares were sold at an average price of $67.42, for a total transaction of $2,359,969.68. Following the transaction, the director now directly owns 14,143 shares of the company’s stock, valued at $953,521.06. The transaction was disclosed in a document filed with the Securities & Exchange Commission, which is available at this link. Corporate insiders own 2.10% of the company’s stock.

About BJ’s Wholesale Club (Get Rating)

BJ's Wholesale Club Holdings, Inc, together with its subsidiaries, operates warehouse clubs on the east coast of the United States. It provides perishable, general merchandise, gasoline, and other ancillary services. The company sells its products through the websites BJs.com, BerkleyJensen.com, Wellsleyfarms.com, and Delivery.bjs.com as well as the mobile app. 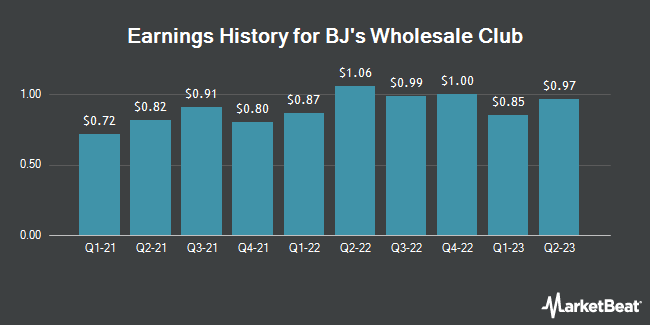 Thales S.A. Given Consensus Recommendation of “Moderate Buy” by Brokerages

Complete the form below to receive the latest headlines and analysts' recommendations for BJ's Wholesale Club with our free daily email newsletter: