Equities analysts expect that Intel Co. (NASDAQ:INTC – Get Rating) will announce $0.69 earnings per share for the current quarter, according to Zacks. Eleven analysts have issued estimates for Intel’s earnings, with estimates ranging from $0.60 to $0.71. Intel posted earnings of $1.28 per share in the same quarter last year, which would indicate a negative year-over-year growth rate of 46.1%. The firm is scheduled to issue its next quarterly earnings results on Monday, January 1st.

According to Zacks, analysts expect that Intel will report full-year earnings of $3.53 per share for the current year, with EPS estimates ranging from $3.26 to $3.60. For the next year, analysts expect that the company will report earnings of $3.69 per share, with EPS estimates ranging from $2.94 to $4.00. Zacks’ EPS calculations are a mean average based on a survey of sell-side research analysts that cover Intel.

Intel (NASDAQ:INTC – Get Rating) last released its quarterly earnings results on Thursday, April 28th. The chip maker reported $0.87 EPS for the quarter, beating the consensus estimate of $0.80 by $0.07. The business had revenue of $18.40 billion for the quarter, compared to analyst estimates of $18.32 billion. Intel had a net margin of 31.68% and a return on equity of 21.67%. The company’s quarterly revenue was down 6.6% on a year-over-year basis. During the same period in the prior year, the business earned $1.39 earnings per share.

The firm also recently announced a quarterly dividend, which will be paid on Wednesday, June 1st. Shareholders of record on Saturday, May 7th will be given a $0.365 dividend. This represents a $1.46 annualized dividend and a yield of 3.51%. The ex-dividend date is Thursday, May 5th. Intel’s dividend payout ratio is 24.25%.

Intel Corporation engages in the design, manufacture, and sale of computer products and technologies worldwide. The company operates through CCG, DCG, IOTG, Mobileye, NSG, PSG, and All Other segments. It offers platform products, such as central processing units and chipsets, and system-on-chip and multichip packages; and non-platform or adjacent products, including accelerators, boards and systems, connectivity products, graphics, and memory and storage products. 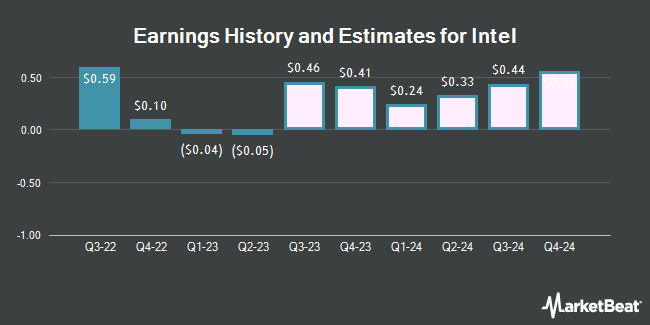 Receive News & Ratings for Intel Daily - Enter your email address below to receive a concise daily summary of the latest news and analysts' ratings for Intel and related companies with MarketBeat.com's FREE daily email newsletter.

Complete the form below to receive the latest headlines and analysts' recommendations for Intel with our free daily email newsletter: