Lear Co. (NYSE:LEA) Given Consensus Rating of “Hold” by Brokerages

Shares of Lear Co. (NYSE:LEA – Get Rating) have earned a consensus recommendation of “Hold” from the seventeen research firms that are covering the firm, MarketBeat.com reports. Two research analysts have rated the stock with a sell recommendation, five have assigned a hold recommendation and four have issued a buy recommendation on the company. The average 1 year price objective among analysts that have covered the stock in the last year is $169.64.

Several large investors have recently bought and sold shares of LEA. EverSource Wealth Advisors LLC bought a new stake in Lear during the 4th quarter worth approximately $32,000. National Bank of Canada FI acquired a new position in Lear in the fourth quarter worth $35,000. Desjardins Global Asset Management Inc. bought a new stake in shares of Lear during the fourth quarter worth $36,000. Sandy Cove Advisors LLC acquired a new stake in shares of Lear in the first quarter valued at $29,000. Finally, Old North State Trust LLC raised its holdings in shares of Lear by 236.2% in the fourth quarter. Old North State Trust LLC now owns 232 shares of the auto parts company’s stock valued at $42,000 after buying an additional 163 shares during the last quarter. Institutional investors own 95.46% of the company’s stock.

Lear (NYSE:LEA – Get Rating) last posted its earnings results on Tuesday, May 3rd. The auto parts company reported $1.80 earnings per share for the quarter, beating the consensus estimate of $1.56 by $0.24. The company had revenue of $5.20 billion for the quarter, compared to analyst estimates of $5.02 billion. Lear had a return on equity of 7.51% and a net margin of 1.15%. The business’s revenue was down 2.9% compared to the same quarter last year. During the same period last year, the company earned $3.73 earnings per share. On average, equities research analysts predict that Lear will post 8.34 earnings per share for the current year.

The firm also recently announced a quarterly dividend, which will be paid on Wednesday, June 29th. Stockholders of record on Friday, June 10th will be given a dividend of $0.77 per share. The ex-dividend date of this dividend is Thursday, June 9th. This represents a $3.08 annualized dividend and a dividend yield of 2.36%. Lear’s dividend payout ratio (DPR) is currently 84.85%.

About Lear (Get Rating) 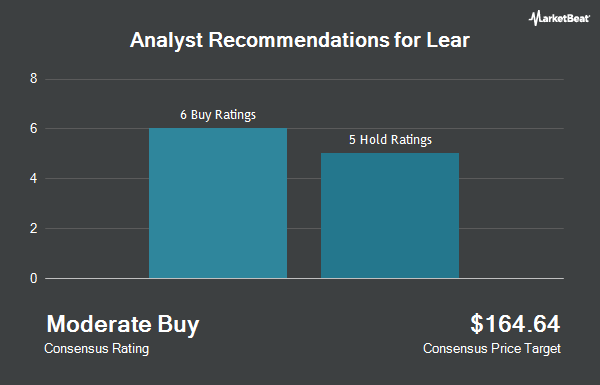 Receive News & Ratings for Lear Daily - Enter your email address below to receive a concise daily summary of the latest news and analysts' ratings for Lear and related companies with MarketBeat.com's FREE daily email newsletter.

Complete the form below to receive the latest headlines and analysts' recommendations for Lear with our free daily email newsletter: