AMN Healthcare Services (NYSE:AMN – Get Rating) released its earnings results on Thursday. The company reported $3.31 earnings per share (EPS) for the quarter, topping analysts’ consensus estimates of $3.00 by $0.31, Briefing.com reports. The firm had revenue of $1.43 billion during the quarter, compared to analysts’ expectations of $1.37 billion. AMN Healthcare Services had a return on equity of 44.09% and a net margin of 8.67%. The company’s revenue was up 66.4% on a year-over-year basis. During the same quarter in the prior year, the company earned $1.64 EPS. AMN Healthcare Services updated its Q3 2022 guidance to EPS.

AMN has been the subject of a number of recent research reports. StockNews.com downgraded shares of AMN Healthcare Services from a “strong-buy” rating to a “buy” rating in a research note on Tuesday. Credit Suisse Group increased their price objective on shares of AMN Healthcare Services from $120.00 to $121.00 and gave the stock an “outperform” rating in a research note on Thursday, June 16th. Six analysts have rated the stock with a buy rating, According to data from MarketBeat.com, the stock presently has an average rating of “Buy” and a consensus price target of $137.60.

In related news, insider Mark Christopher Hagan sold 1,400 shares of the firm’s stock in a transaction dated Friday, June 3rd. The shares were sold at an average price of $97.53, for a total value of $136,542.00. Following the completion of the sale, the insider now directly owns 13,345 shares in the company, valued at approximately $1,301,537.85. The sale was disclosed in a document filed with the Securities & Exchange Commission, which is available at the SEC website. 0.80% of the stock is currently owned by company insiders. 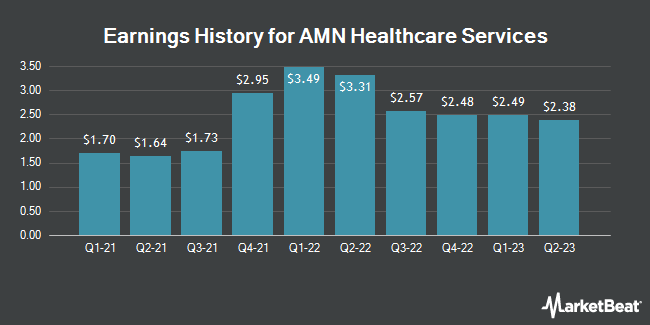 Biotricity vs. Its Competitors Head to Head Review

Complete the form below to receive the latest headlines and analysts' recommendations for AMN Healthcare Services with our free daily email newsletter: